Philip Constantine’s face may seem familiar; you are not mistaken. He was the member of the successful Greek boy band “ONE” that has in it’s history achieved multiple gold and platinum cd singles and albums. Constantine was born in Cyprus and has been challenging his creative nature since he was still in elementary school.  During his childhood he started writing his own plays and performed them in front of his school mates.  Now Philip Constantine is back for one more astonishing performance.  His role in the upcoming play “Oresteia”, directed by the acclaimed director Leonidas Loizidis begins this month in the Kirk Theater off of Broadway. It will then continue with a nationwide theatrical tour. Philip talked to us about the play and his life in Los Angeles.  LA is where he lived while studying in NYFA.  He also discusses his recent controversial naked performance in the popular theatrical show “Naked Boys Singing”. 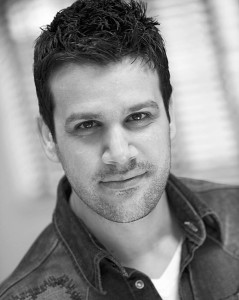 Tell us about your role in the upcoming theatrical play “Oresteia” directed by Leonidas Loizidis.

Well, actually it’s “roles”, plural! Due to the world-tour and the tight budget of the production, the cast had to consist of only 2 boys and 8 girls! We boys had to learn all 4 major roles, but you’ll mainly see me perform as Agamemnon, Aigisthos and God Apollo, a huge task as you can imagine, since every role is different and very demanding! I have to differentiate my voice, my movement, my state of mind in order to capture all 3 characters in their entity! I always like a good challenge and Leonidas, our director, surely gave me one.

What were the challenges you had to face while preparing for this role?

Ancient Drama has to be the most difficult category in theatre! Its approach is unlike any other an actor can have. There’s a lot of homework involved, and before you start memorizing your lines you have to really study the history behind not just the role you have, but all the characters, as well as the story/tragedy hidden behind their “masks”! For me, it was an even greater challenge with my roles, because I had to cope with problems such as age difference, i.e. with Agamemnon, or trying to find ways to act like a God in rage, i.e. Apollo. Aigisthos on the other hand appears as the bad guy, but truly he merely seeks revenge for the murder of his father and brothers, another emotion which was hard to portray!

How do you feel about the fact that Oresteia is going to start soon it’s theatrical tour in the States, and how contributing do you think this tour will be, in the transmittance of the ancient Greek culture?

Oresteia’s trilogy is one of Greece’s theatrical treasures, discovered, saved and preserved in its entity! I feel honored and privileged that I had the opportunity as an actor to study and perform this masterpiece in depth! Touring the USA and so many other countries, especially performing on Broadway, New York for a month, is just an added bonus for all of us, a dream coming true and another great way for the world to experience an important part of the Greek culture! 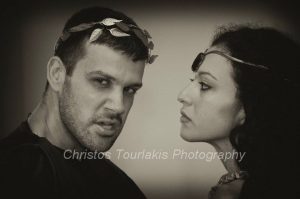 You started your career as a singer in the popular music band “One”. Tell us how this experience has affected you as an actor.

“ONE” has been a great school for me, in many ways! Mainly because we, as a band, were blessed with great songs and success and had the opportunity to experience so many wonderful moments together, especially performing in front of thousands of people all over the world! Stage presence is extremely important! You must be able to portray every single emotion the lyrics/music talk about, with your face, body and of course your voice, in order to impart everything to your audience! I grew a lot through this, as an artist and as a person, and I got a serious taste of what show-business is all about! As an actor I definitely feel more comfortable on stage, because of my singing backround!

Tell us about your experience living in Los Angeles and studying in New York Film Academy.

I try in general to make wise decisions and my goal as an artist is to keep learning and improving myself! So, even though I studied acting in Athens for 3 years, I felt there was something missing! I wanted to study acting for film in particular, and what better place to do that than Hollywood, Los Angeles! The short course I chose did exactly that, and offered me knowledge about the film industry that I did not have before! I got to act in various short films in the actual backlot at the Universal studios and met and worked with talented people from all over the world! I’m very happy I’m going back to LA with Oresteia, since i have many friends there now.

You also lived for a period in the UK obtaining your Bachelor of Fine Arts from Central Saint Martin’s College of Art and Design. Tell us a little bit about that and how different was it comparing living in the States?

London is one of my favourite cities in the world and very close to my heart! I actually find it very similar to New York, since both cities are very artistic, filled with wonderful surprises, theatres, museums, galleries, restaurants and people from all over the world walking down their streets! I was fortunate enough to study in one of the best fine art colleges in the world, Central Saint Martin’s College of Art and Design, my first initiation in the art world, and especially in the world of film and cinema! That’s where I produced and directed my first short films, working mainly with 16mm film and generally experimented and blossomed as an artist.

You recently participated in the hit Theatrical Show “Naked Boys Singing”. Tell us about your experience there and how challenging is it for actors to appear naked in front of an audience.

It was a very liberating experience I suppose for both me and the Greek audience! 99% of the people who saw our Greek version of this musical, told me that after their first “shock” they did not think of anything of the nudity! It was very natural for them and it’s very natural for me as well, as long as “the nude” has reasons of existence within the play. Nudity I suppose is an important issue for some actors, insignificant for others, but it’s important above all to feel good and comfortable in your own skin! For me, a good actor is always “naked” anyway in front of his audience, whether he’s wearing clothes or not!

Tell us a few things about yourself and things you like doing in your free time.

Well, I’m a genuine Libra, born 16th October! That means I like my balance in all situations, I like beautiful things and people on the outside as well as the inside, anything that disturbs my artistic aesthetic I try to fix, I’m very creative, bold, sincere and stubborn when it comes to ideas and dreams I want to realize, and loyal to my friends and family above all! In my free time I paint and take photographs of anything that excites my eyesight! Some of my work was exhibited in Athens, London and Nicosia already. I also like keeping healthy by working out or playing sports, i.e. basketball.

What are your plans after “Oresteia”?

I always like to take one step at a time, and my main focus right now is obviously the world-tour with ORESTEIA, which apart from exciting it’s going to be exhausting as well! However, I have a couple of options I’m considering for the new season, for both theatre and cinema, and i will announce my next step when the time is right. You can check all my latest news on www.philipconstantine.com or on my official facebook page.