New Crossing Point for Greece and Bulgaria Is Inaugurating Today 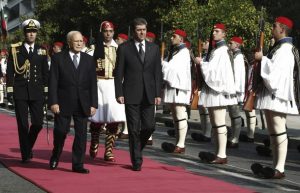 On September 9, Bulgaria and Greece will open a new crossing point on their joint border, thus celebrating the 130th year since the establishing of formal diplomatic relations.

The new Ivaylovgrad-Kyprinos border crossing close to Bulgaria’s Kardzhali and Greece’s Alexandroupolis will be inaugurated by the Presidents of Bulgaria and Greece, Georgi Parvanov and Karolos Papoulias, at 11:30 am today. After that, the two presidents will have a tete-a-tete meeting in Ivaylovgrad.

This will be the fifth crossing on the 493-km long Bulgarian-Greek border, which already has four border crossings – Kulata-Promachonas, Ilinden-Exochi, Svilengrad-Ormenio, and Zlatograd-Thermes. The last one is only for cars and was opened in January 2010 by the two Prime Ministers Boyko Borisov and George Papandreou.