National Bank of Greece States Nation Will Not Default 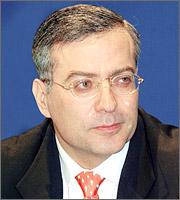 A top official with The National Bank of Greece on Wednesday expressed confidence in the country’s economic future saying Greece will not default.
“We strongly believe that there is no such a chance,” Apostolos Tamvakakis, chief executive officer of the NBG stated.  NBG is the biggest bank in the debt ridden country.
Tamvakakis rejected scenarios that the bank was preparing for the worst through a capital increase of 2.8 billion euros. NBG announced that it has planned to raise 1.8 billion euros  in October from capital markets, selling shares and the rest from the sale of the 20 percent of its shares in the Turkish bank Finansbank in the first quarter of 2011.
Greek banks have been under heavy pressure due to the debt crisis that has plagued Greece since late 2009. The banks were downgraded numerous times by international credit rating firms in early 2010 and lost deposits from Greek customers who struggled with the deep recession.

Americans have been a major part of summer tourism in Greece. Although they may not make up the largest contingent of visitors, they spend more.
Environment