Former Transport Minister Mantelis Not Being Held in Custody 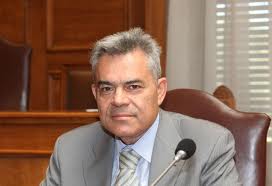 Former Transport Minister Tasos Mantelis will not be held in custody until he is tried.  He will be on trial for allegedly accepting bribes from Siemens Hellas.  Judges decided this yesterday while the parliamentary committee investigating the corruption scandal asked urgently to see another suspect, who claims that he acted as a middleman in delivering slush money for the company.
Mantelis, who has admitted accepting the equivalent of almost 300,000 euros from Siemens, insists it was not a bribe but a campaign donation. He has been banned from leaving the country and told to post 200,000 euros in bail, however a council of appeals court judges decided that he should not remain in custody.
A parliamentary committee is carrying out a separate investigation into the affair and has asked to question for a second time today Pantelis Karacostas.  Karacostas is a civil engineer who last week admitted to receiving slush money from the company and then passing it on to additional parties.