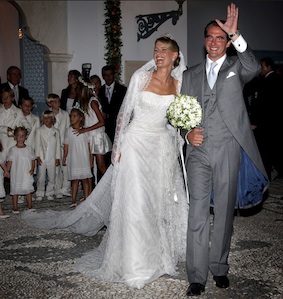 The second son of Greece’s former King Constantine, Prince Nicholas wed fashion events planner Tatiana Blatnik in front of royals from all over Europe on the tiny Greek island of Spetses this Wednesday.
Set against the backdrop of the Saronic Gulf islands’ deep blue waters, members of several European royal families, including Spanish Queen Sofia; who is Constantine’s sister, as well as crown prince Felipe and  wife Letizia attended the event. King Carlos was not present.
Members of royal families from Sweden, Norway, Denmark and the Netherlands were also among the 380 guests who witnessed the union between the 40 year old former prince to Tatiana Blatnik.
The Greek monarchy was abolished in 1974 and while most of its descendents now live abroad, they remain one of the most well connected royal families in Europe.
The wedding is the first time a royal has been been wed in Greece  in over 45 years, following the union between former King Constantine and Queen Anne-Marie in 1964.
Hundreds of joyous tourists and residents lined the entrance to the tiny whitewashed 19th century monastery of Aghios Nikolaos and cheered as the bride arrived in a horse drawn carriage to the chapel.  She wore a traditional lace gown created by Venezuelan designer Angel Sanchez.
The groom arrived by boat from the nearby mainland resort town of Porto Heli along with  hundreds of heavily armed police and coast guard officials. 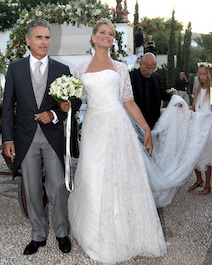 The prince’s eldest brother Prince Pavlos, Tatiana’s brother Boris and family friend businessman Nasos Tanopoulos served as best men at the wedding.
Nicholas is a son of former King Constantine and Queen Anne-Marie. Tatiana is an events planner for fashion designer Diane von Furstenburg in London.
Born in Venezuela and educated in Switzerland and the United States, the 29 year old blonde has some royal blood as she is the granddaughter of Ellinka Countess von Einsiedel.
A regular amongst the international jet set scene, Nicholas was once reported to have been favoured as a royal consort for one of the Scandinavian princesses. But his reputation as a roaming playboy shot down any possibilities of a likely match.
Nicolas and Tatiana met in 2003 during a ski vacation in the Swiss resort of Gstaad through mutual friends and were engaged last year.
The bride’s engagement ring is a sapphire stone which was given to Nicholas by his mother Anne-Marie.  His mon had received it from her parents; the late King Frederick IX and Queen Ingrid of Denmark.
Located just three hours from Athens, Spetses is one of the country’s most beautiful islands. Cars are in short supply and residents and tourists are encouraged to travel around by horse drawn carriage, bicycles, scouters, and sea taxis. 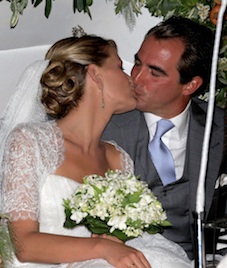 Following the Greek Orthodox religious ceremony, guests were invited to toast their happiness during a reception at the Koutsis ranch overlooking the island’s ancient harbour.
The Koutsis’ are one of the oldest families on Spetses and are also old friends of the former Greek royal family.
Among the guests of honour were newlyweds Crown Princess Victoria of Sweden and husband Prince Daniel, who tied the knot in a lavish wedding earlier this summer. Also attending were her siblings, Carl Philip and Madeleine.
Queen Margrethe of Denmark, Crown Princess Mary and her younger son Prince Joachim were also in attendance, along with his wife Princess Marie. The groom’s mother  Anne Marie is the younger sister of Denmark’s queen.
Norwegian Crown Prince Haakon and Crown Princess Mette Marit were also among the guests as well as Netherlands Crown Prince Willem Alexander and Crown Princess Maxima.
Representing the British royal family were Prince and Princess Michael of Kent.
Pop icon Elton John was also among the guests staying in the 19th century Poseidon Hotel in the island’s town center and performed at the ceremony.
Despite all the pomp and circumstance, the wedding has failed to attract the interest of ordinary Greeks.
Constantine fled Greece in 1967 shortly after the military junta took over and was deposed in a 1974 referendum after democracy returned.
He remains largely unpopular because of his decision to swear in the military colonels and briefly cooperated with them before staging a failed counter coup.