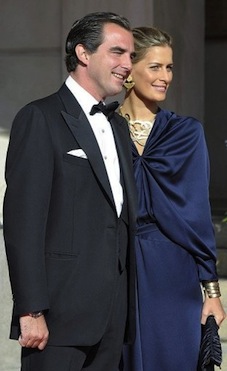 The wedding of the son of the last Greek King Constantine, Nicholas Glucksburg, to his fiancee Tatiana, may not be a strictly “royal” affair. But its guest list certainly is.
Prince Nicholas, 40, is the second son of former King Constantine and Queen Anne-Marie. Tatiana is an events planner for fashion designer Diane Von Furstenburg in London.
Born in Venezuela and educated in Switzerland and the United States, the 29-year-old blonde has some royal blood since she is the granddaughter of Ellinka Countess von Einsiedel.
Seen as a regular amongst the international jet-set, Nicholas was once reported to have been favoured as a royal consort for one of the Scandinavian princesses. But his reputation as a roaming playboy shot down any possibilities of a likely match.
Nicolas and Tatiana met in 2003 during a ski vacation in the Swiss resort of Gstaad through mutual friends and were engaged last year.
Greek media reports that for the first time in years, the island visitor accommodation capacity has been exhausted since the European nobility has arrived in due time, in order to attend the scheduled event. Invitees include the former King’s sister, Queen Sophia of Spain while King Juan Carlos is scheduled to arrive an hour before the wedding on the 25th of August.
Alter television reports in its August 24rth evening broadcast high excitement amongst the local inhabitants because of the huge influx of media, european aristocracy and commotion regarding the bride to be’s wedding dress, which is a unique silk creation by well know fashion designer Diane von Furstenberg; the dress will only be revealed when the bride makes her way towards the church.
The invitees include members of the royal house of Denmark, the mayor of Spetses, the royal house of Spain and many other European nobility.Greek television station Alter reports that Media attention may be more focussed on the arriving aristocracy, rather than the couple to be wed.
Constantine the Second was crowned King of Greece in 1964 after the death of his father King Pavlos, and retained the title until ousted by referendum called by Prime Minister Constantinos Karamanlis in 1974.
The plebiscite which took place on the 8th of December in 1974, shortly after the Cyprus disaster and the fall of the colonel lead military junta, abolished the monarchy and established the Third Hellenic Republic.
Regardless, the Mayor of Spetses Mr. Evangelos Kodaxakis emphasized through the Greek television station Alter his satisfaction with the fact that former King Constantine had chosen Spetses as the place of marriage, since the increased media attention is bound to benefit Spetses in these trying times for Greek tourism as a whole, and the island in particular.