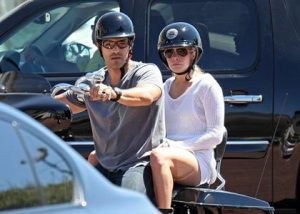 American country singer and actress, LeAnn Rimes and boyfriend actor Eddie Cibrian cruised down to Malibu on a Harley Davidson Motorcycle to grab a Greek bite at Tony’s Taverna.  About a month ago, radio personality and TV host, Ryan Seacrest was seen enjoying lunch with some of his pals at Tony’s.

Later LeAnn tweeted, “Kinda sick of eating out. Haven’t had time to cook lately. Headed to the studio again tomorrow. Maybe cook after! I miss it.”

It is no news that Taverna Tony in Malibu California is popular among celebrities. Stars are sighted dining there frequently.

The garden and Greek island themed decor paired with the delectable Greek cuisine is no wonder why Hollywood celebs keep coming back to Taverna Tony.