Greek-Australian "Coffee Experts" are Looking to Enter the Greek Market 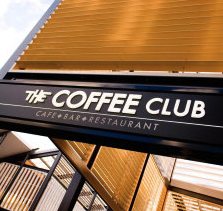 People complain about the price of a cup of coffee in Greece, but -let’s face it- Greeks know how to create upscale coffee environments around the world. Three Greeks are leading the way in the coffee and restaurant market in Australia and recently travelled to Greece to bring their successful business to the land of their ancestors. Last week, the director of Australia’s largest home-grown café group The Coffee Club was in Greece looking for potential store locations to expand their hugely successful franchise.
John Lazarou was in Athens until 21 August to discuss with possible partners The Coffee Club’s international expansion plans.
As one of the three Greek-born directors of The Coffee Club, John says it is widely recognised for introducing a European-style cafe culture to Australia, so it is only fitting The Coffee Club is looking to open its first European location in Greece.
Success Story 1989 to now…

In 1989, founding directors, Emmanuel Kokoris and Emmanuel Drivas were out searching for a late
night cup of coffee in Brisbane, Australia, and not just a coffee, an excellent coffee. After an unsuccessful journey and hours of chatting, the pair planned a new business venture: The Coffee Club.
Their idea was to create more than just a place where people could meet for coffee. It was to provide a relaxed meeting place that is casual yet sophisticated, stylish yet affordable. In short, their plan was to meet an untapped need in the Australian hospitality marketplace.
At first, The Coffee Club opened in 1989 in Brisbane’s magnificent Eagle Street Pier complex on the banks of the Brisbane River. The founding Directors’ hard work paid off because it met with instant success. Today, The Coffee Club has expanded its presence to a franchise chain of almost 220 outlets throughout Australia & New Zealand, all working towards one mission: to provide good food, great service and excellent coffee! The Coffee Club offers two types of experiences – the ‘Club’ and the ‘Café Bar Restaurant’.
Here are some interesting statistics on The Coffee Club:
· The Coffee Club is Australia’s largest home-grown cafe group with 252 cafes across Australia, New Zealand and Thailand
The Coffee Club serves more than 40 million cups of coffee every year
· The Coffee Club generated over AUD$260 million in revenue internationally in the past year
Total store sales have increased 17.5 per cent in Australia, and 8.8 per cent in New Zealand in the past year
· Last year, one of the largest hospitality and leisure companies in Asia Pacific, Minor International, took a 50 per cent stake in The Coffee Club, fuelling its international growth – as well as Europe, sights are now set on New Caledonia, Bahrain, Vietnam and Mauritius.