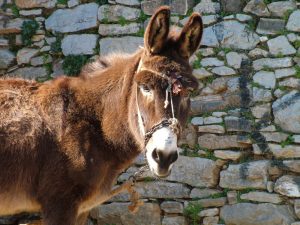 A feature-length movie scheduled for release in 2012 is set to highlight the legal mess in Greek law regarding same-sex marriages. The story concerns a grandmother on an island in the Dodecanese who is shocked to discover her only grandson is planning to marry his American boyfriend in a plot inspired by what happened on Tilos in 2008.

Shocking the Donkeys, subtitled The gay marriage that rocked the cradle of civilization, is expected to draw attention to the fact that Greece refuses to consider same-sex marriages and that polls show 85% of Greeks are against it.

The screenplay is the brainchild of British author James Collins who lives on Symi in the Dodecanese, and the film is being produced by a consortium of UK-based film companies. Shooting is expected to take place next summer.

The makers hope the project will bring a much needed boost in gay tourism to the region, in the same way that Skopelos experienced a massive surge of straight visitors looking for a romantic wedding following the release of Mamma Mia! They want, however, to avoid the mistake of that project which left thousands of tourists disappointed when they discovered many of the locations didn’t actually exist and were only sets.

“Whichever island is chosen as the location for Shocking the Donkeys, we want the film to showcase real places, real features and real cultural traditions and customs,” said James Collins. “When they visit the island, we want them to see and experience everything they saw in the film, except the characters, of course.”

Although in 2008 the then Greek justice minister, Sotiris Hatzigakis, said he believed gay marriage was illegal in Greece, gay rights campaigners claim the law is uncertain because it doesn’t specifically state that couples have to be of opposite genders. The film will exploit this legal loophole and feature a mayor who believes the marriage can go ahead, and a police chief who threatens to arrest him if it does.

The film comes at a time when gay marriage has come to the top of the social agenda in many countries including the USA, Argentina, Australia, and several African countries (where it is being strongly opposed).

“I hope this film is successful and leads to a surge of gay couples worldwide thinking of having their own Mamma Mia! experience on one of the Greek islands,” said James Collins. “Such a surge in demand would force the Greek government into a discussion on the issue and do something about it rather than leaving it to people taking the law into their own hands,” he added.

Shocking the Donkeys, a romantic comedy which treats the issue with a light but serious touch, has a happy ending in which the community is reconciled to the idea of gay marriage and benefits from a massive surge in gay wedding tourism.