Athena Awards by the Phoenix Chamber of Commerce 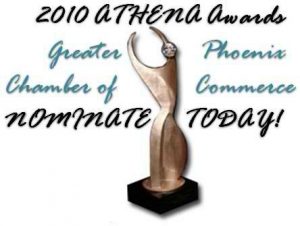 The Greater Phoenix Chamber of Commerce has selected 11 finalists for its 23rd annual Athena Awards, which honors women for professional achievements and community service.
The awards, named after the Greek goddess of wisdom, will be presented in October and they are part of a nationwide program that began in 1982. More than 6,000 such awards have been presented in more than 500 communities around the world since then, according to Chicago-based Athena International. The Phoenix chamber began awarding them in 1987.

The three awards presented in October will honor businesswomen of the year in the private and public sectors, as well as a young professional. The finalists were selected from more than 50 nominees.