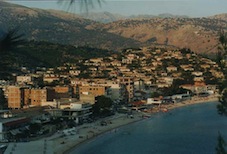 Tension prevails in Himara after the assassination of Aristotelis Goumas, 37, member of the Greek minority in Albania. The incident happened Thursday night in the village Campi in Castro of Himara in South Albania.
The incident started when three Albanians asked Goumas to stop speaking Greek in his shop. The dispute led to beating of the Greek, who managed to escape and complain to his friends.
Later at night the three Albanians detected the Greek again on a land road and caused an accident in which Goumas lost his life.
The police has arrested six people. According to North Epirus News Agency nenanews.eu the suspects are aged 19-25 years old.
Greek MEGA TV reported that the Albanians told the police, that the Greek was blocking the road with his motorcycle and that they hit him and had their car crash on the motorcycle because he spoke to them in Greek.
Greek Foreign Ministry spokesman, Grigoris Delavekouras, condemned the death of Aristotelis Goumas saying that “Unacceptable criminal acts like that aim to arouse ethnic tension with unpredictable consequences and undermine the bilateral relations between Greece and Albania. It must be condemned by the entire Albanian society and its political representatives”