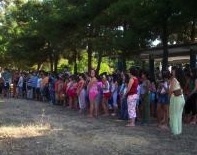 More than 1000 children and young people of the Greek Diaspora are being hosted this year in Greece.  The trip works within the framework of the World Hospitality Program, held by the Ministries of Foreign and Internal Affairs with the participation of the Union of Prefectural Authorities (ENAE) and the Central Union of Municipalities and Communities (KEDKE). The management of the program is being handled by The Hellenic Agency for Local Development and Local Government (EETAA).
The program was launched in 2001 and how now become increasingly attractive year after year with an increasing number of participants.  The framework focuses on the actions taken by the Greek state for the preservation of the cultural identity of Greeks abroad and the promotion of the Greek culture in their residing nations.
Again this year, despite the difficult economic situation  the program for children and youths abroad are running smoothly.
Between July 20th and the 15th of September children and youths between 8 and 25 years old will be hosted for two weeks in camps and premises of 35 Municipalities and Prefectures throughout Greece. Xeni Balotis who is responsible for the program stated this to ANA – MPA.
According to EETAA figures the number of children and youth participants from Australia and the US has increased this year.  Bulgaria has 178 campers and Ukraine has 162 participants. Furthermore 107 children originate from Australia, 114 from Latin America, 98 from Canada, 49 from the USA, 19 from Mexico, 91 from Romania and one  youth from The United Arab Emirates, amongst others.
“All Municipalities and Prefectures carrying out the 2 week programs, ensure that the children’s and youth’s stay involves various activities, such as Greek traditional dance lessons and music, excursions to archaeological sites, entertainment etc.” mentions Baloti.
Adding that “The fundamental part of the accommodation are courses and programs in Greek language and history, folklore etc.”
Certain authorities take this a step further, such as the Municipality of Mires in Crete.  The renowned children’s choir “Dimitris Typaldos” will be participating in the hospitality program. During their stay choir members will perform rehearsals with children from Australia, Ukraine.  On August 15th they will offer a concert togethor.
However the local and prefectural authorities of the Ionian & Aegean Islands with the exception of Kalymnos, did not respond regarding participation in this year’s programs.  A fact that is very surprising.
Since 2001 hospitality programs for Greeks abroad have been dynamically developed and offer the opportunity to more Greeks abroad to visit their homeland.
With the exception of 2004 when Greece hosted the Olympic Games, over 14,000 children have been hosted with funding from national resources.