Truckers Back to Work but Strike Plans Remain 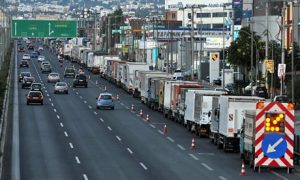 The Greek truckers debated yesterday on the week long strike which caused a huge fuel shortage at the peak of the tourist period-the summer. The breakthrough came late on Saturday when the government announced that they would  implement the civil mobilization order, which the strikers ignored in case  the strike continues.
“The strke is what caused the mobilization…. We will hold talks if the strike ends  followed by the lifting of the civil mobilization” Transport Minister Dimitris Reppas told Mega Television. He also underlined that the government will not tolerate a new strike and will definately proceed to a liberalization of the tightly controlled freight sector, which at the moment keeps the transport services fees really high.
Commandeered lorries, petrol station trucks, military vehicles and refineries worked during the whole weekend to alleviate the shortage that exhausted Greece. “Things should be smoothed by Sunday night.” noted Mr. Reppas.  He also mentioned that the government took this rare measure of civil mobilization order in order to prevent shortages in food and medicine.
Talks hold on as the truckers underline that reducing the new license charge is totally unfair to the existing operators who have already paid up to 300,000 euros ( $391,000 dollars). On the other hand, the Greek government explains that this is part of  the reform program that they committed to in May, in exchange for a 110 billion euro ($143 billion dollar) loan package from the International Monetary Fund and the European Union.
“We have made our decision with a sense of responsibility and taking into account the problems the strike action has caused,” Federation President Giorgos Tzortzatos stated.
Today the truckers are back to work and the whole country hopes that something like this will not be repeated as a wide range of businesses have been negatively affected. The strike has damaged the peach industry; a staple Greek export, with more than a dozen canneries shutting down for lack of fuel, according to officials. From hoteliers to rental car owners, those working in the sector described how panic stricken tourists had either cancelled bookings or said that they would not be coming back…The period to 15 August is the heart of the tourism season and an entire week has now been lost” stated President of  The Greek Trade Association Vassilis Korkidis.
(source: AFP)