Tourists Discouraged from Traveling to Greece 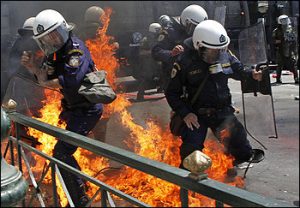 Mass Media throughout the world are reporting current events happening in Greece during the last few days, thus discouraging all those wishing to spend their holidays in Greece in the near future. For example, Sky News are reporting on Twitter that tourists are being warned to avoid the balmy country owing to the fact that everything is going barmy.
Apart from the financial turmoil, Greece is now in the grip of a petrol shortage and a strike by truck drivers, that has caused many problems in transportations of food and medical supplies. To futher aggrevate the situation terrorist group The Sect Of Revolutionaries” or “Rebel Sect” has now declared that they are hell bent on turning the country “into a war zone”, warning that they plan to attack police, businessmen, prison staff and journalists.