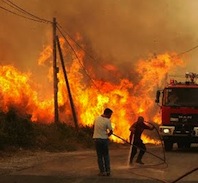 Three major wild fires were underway on Thursday, in the prefectures of Viotia, Arcadia and southern Evia.
The first fire near the village Pera in Livadia started at noon and was burning forest, while no inhabited areas were threatened. A force of 32 firemen with 14 fire engines and 17 people on foot were battling the blaze on the ground, assisted by four water-bombing aircraft and two helicopters from the air.
The fire in Derveni, Arcadia broke out a short while later in a stretch of brush and trees and was again far from any inhabited areas. A total of 30 fire-men, 10 fire-engines and two units on foot were deployed to contain the flames, assisted by two helicopters from the air.
The third fire broke out at around 14:00 in the afternoon at Lala near Karystos, in a region of brush quite near the settlement. Two helicopters, 18 firemen with six fire-engines are currently engaged in the fire-fighting effort.
According to maps issued by the civil protection general secretariat, meanwhile, there is a high risk of fires breaking out in several regions in Greece on Friday, including Attica, Evia, the Cyclades islands, Lesvos, Samos, Chios and all of Crete. All relevant services have therefore been placed on standby and the public has been asked to carefully avoid any kind of activity likely to accidentally cause a fire.
(source: ana-mpa)