Black Anniversary of Turkish Invasion of Cyprus in 1974 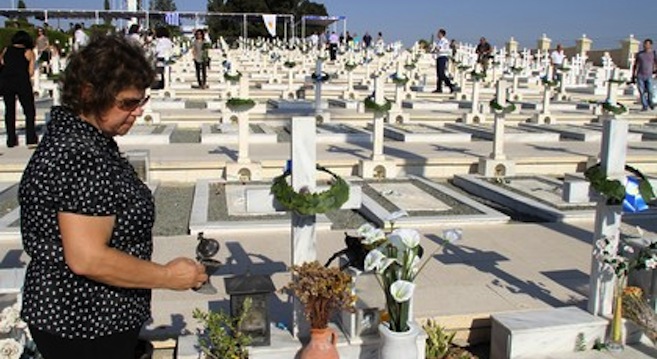 Prime-minister G. Papandreou and all Greek political parties issued messages to mark the 36th black anniversary of Turkish invasion of Cyprus in 1974. Till August 14-15 Turkish troops had occupied 40% of Cyprus including Ammohostos and Morfos after the collapse of the Geneva Conference. Special importance is placed on George Papandreou meeting with Cyprus President Dimitris Hristofias on Wednesday at Larnaca Airport, where the Greek Prime-minister will stay few hours prior to his departure for Israel and Palestine.
Prime-minister’s Message
In his message Prime-minister G. Papandreou says: “36 years have passed since Turkish invasion of Cyprus. It is a painful anniversary for Cyprus, Greece and Hellenism. July, 20, 1974 signaled the beginning of illegal occupation of big part of Cyprus by Turkish troops- illegal occupation of an independent country, member of the UN and the EU. International world order was violated on that day and violation continues to present.
Present situation of Cyprus is unacceptable and must end through the achievement of a just, viable and functional solution on the basis of UN Security Council resolutions- a bicommunal, bizonal federation.
We actively support Cyprus President D. Hristofias efforts. Cyprus issue is of top national priority for Greece. We call on Turkey to indicate the necessary political willingness for a just settlement of the Cyprus issue. A necessary precondition for complete normalization of Gree-Turkish relations. The Cypriot people-Greek-Cypriots and Turkish Cypriots have the right to live in an environment of peace, security, prosperity and confidence.enjoy the benefits of the EU and contribute to the common European vision”.
In his statements Cyprus President Dimitris Hristofias said :
“We indeed have to deal with a difficult interlocutor, who many times behaves as violent actions can be accepted and at the same time for communication reasons, heralds that he wants a solution within 2010. History has taught that we should all assume our share of responsibility within the framework of efforts for a solution of the Cyprus issue which will reunite our country , people, economy and institutions, put an end to occupation and settlement and restore human rights for all Cypriot people”.

The Santorini shipwreck of the cruise ship MS Sea Diamond has been a permanent feature of the Greek islands for the last 14 years.
Greek church

The relatively young prelate reached out to the Greek Orthodox women of the Americas, telling them that he realizes without them, "our parishes would be dead."