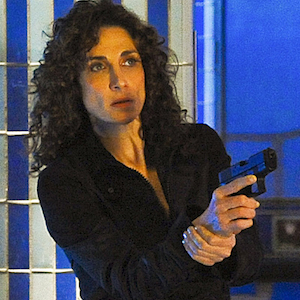 Talented Greek-American actress, Melina Kanakaredes is most widely known as Detective Stella Bonasera on CSI: NY. CBS network announces that after six seasons she has decided to leave the show.

“We hoped Melina would return to ‘CSI: NY’ for another season, but we respect her decision to move on,” the network said in a statement. “Her amazing talent and invaluable contribution to the success of the series are greatly appreciated and will not be forgotten.”

According the the LA times, Kanakaredes gave no further explanation in her statement. “I made some amazing and lifelong friendships during my six seasons on ‘CSI: NY,’ and I will treasure them forever!”.

Viewers are sad to see Daytime Emmy nominee for ‘Guiding Light’ go after 6 years of playing Detective Stella Bonasera.  This tough role led her to star in another hit drama, NBC’s ‘Providence,’ as well as appearing on ‘NYPD Blue’ and ‘The Practice. Melina’s latest work on film can be seen in the Feb. 2010 adaptation of the novel ‘Percy Jackson & the Olympians: The Lightning Thief.’

Actress, Sela Ward is being considered to fill the big shoes of Melina Kanakaredes on CSI; NY.