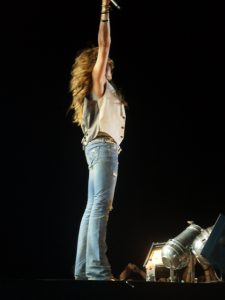 True to form, superstar Anna Vissi delivered a knockout concert in her native Cyprus at The Paphiakos Stadium in Paphos last night! Arriving onstage dressed impeccably in jeans, a silver sequined tank top and vest, she wowed the crowd all night long opening with a rendition of her hit “Stin Pira”.  Anna sang a wide range of songs in a passionate and explosive performance giving it as always, her all.  She was extremely happy to be in Cyprus and Cyprus was elated to receive her!
Highlights of the night included a trio performance of “Dodeka” with Greek Idol winner Valanto Trifonos and finalist Nicole Paparistodimou, both fro 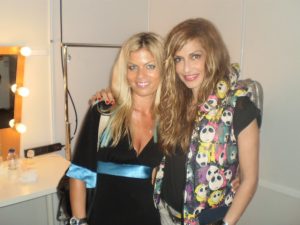 m Cyprus.  She also  sang a heartfelt tribute to former Maple Jam Music Group President Greg Ladanyi with “Eleni”.  Mr. Ladanyi produced her latest album, two time Greek platinum status Apagorevmeno (Forbidden).
The defining element of Anna’s concert was the genuine gratitude and warmth she has for her fans, which she proved throughout the show’s entirety.  Gifts such as bracelets, watches and stuffed animals were thrown onstage and she picked each and every one up thanking each giver profusely.  Anna Vissi is not only beautiful with a stellar voice but as proven has a heart of gold.  Greece and Cyprus are very lucky to call Anna Vissi their own!
In a exclusive interview with The Greek Reporter Ms. Vissi had the following comments:
Maria Athens: Are you planning any upcoming concerts in North America?
Anna Vissi: At the moment I am planning a big show for the fall in Athens. No shows in North America for now, perhaps 2011.
Maria Athens: How did working & living in L.A. contribute to the enormous sucess of your Forbidden Album, summer tour, Fabulous Show, etc.?
Anna Vissi: I had a lot of time away from Greece that really allowed me to explore diffrent writers and try something new. I was blessed to have collaborated with Glen Ballard, and Dave Stewart and the production was so amazing because I felt really relaxed in LA and loved the experience of living there. The summer tour  was a great way to return to Greece by travelling around and visiting fans all over. It was great to come home.
Maria Athens: Will close friend Greek American fashion icon Patricia Field & your daughter design another amazing wardrobe for your upcoming winter show with Sakis Rouvas?
Anna Vissi: I hope she’s available. I love Pat and she is an enormous talent. Her energy and creativity is mind blowing. I would be so blessed to have her with us again and again and again….
Maria Athens: Any final words for your fans in America?
Anna Vissi: There is so much I could say but for the time being, I would love to thank all of you for so many years of commitment to my music and career. I want you to know how lucky I feel to have fans of Greek origin from all parts of the world. It shows me how much you love your heritage and people. I am just as proud of them as they are of me!!

If you're in a crowd in Greece and shout "Mr. Papadopoulos," the most common surname in Greece, chances are that at least one man will turn his head.
Education