GRNews
GreekReporter.comUSAThe 40th Congress of the Greek Orthodox Archdiocese of America in Atlanta 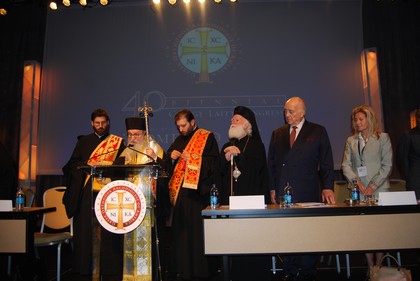 The 40th Biennial Clergy-Laity Congress of the Greek Orthodox Archdiocese of America, will convene in Atlanta until the 8th of July 2010 and is attended by hundreds of clerics and laics.

The congress was inaugurated with the Orthros service and Hierarchical Divine Liturgy held in Atlanta’s Greek Orthodox Cathedral with Archbishop Demetrios of America presiding over the Divine Liturgy concelebrating with the Metropolitans of the Holy Eparchial Synod of the Archdiocese. Mr. Demetrios said that “this is a new period of challenges and now is time for action. This is the time for the world to be saved”.

In addition, during the congress many opinions and ideas were reflected. Among them, the Vice President of the Archiepiscopal Council, Emmanuel Tzacharis suggested that the English language be used to a larger extent in church so that the new generation that does not speak Greek would not abandon the religion underlining that “the progress and the future of the Orthodox Church in America depends on our ability to keep the new generation connected with our Church on the one hand and our ability to accept all those wishing to adopt the greek-orthodox faith on the other”.

The representative of the Ecumenical Patriarchate, Archbishop Irenaios of Crete conveyed the paternal and patriarchal greetings and blessings of Patriarch Bartholomeos. In his words to the faithful the visiting hierarch said he feels the closeness and unity between the orthodox faithful here in America and his flock in Crete and all the Orthodox around the world.