One Less Greek in Chicago Sports 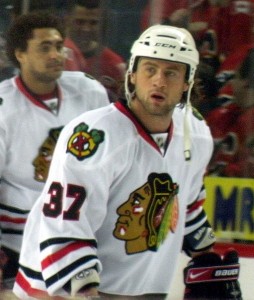 Just weeks after the historic Stanley Cup win, the Chicago Blackhawks team was being dismantled. Greek American player Adam Burish has been traded as well, leaving one less Greek in Chicago sports.

The trade was confirmed just days ago. Burish – a native of Madison, Wisc. – will make a new home with the Dallas Stars. According to Chicago Now, the Hawks failed to make him an offer, and so he was signed as an unrestricted free agent. The league’s salary cap had forced the team to give up many of its star players.

Before the trade was announced, the 27 year-old player told the Chicago Tribune, “I’m hoping something can be worked out. I’d like to stay. It’s so much fun in Chicago right now.”

He also told the Trib that he “was intrigued” by the prospect of an expanded role with a new team.

“A place where I could have the opportunity to probably play more and have a bigger contributing role would be the one thing that would excite me.”  He now has that chance.

The winger had been drafted by the Blackhawks in the 9th round of the 2002 NHL Entry Draft, 282nd overall.

On July 1, Burish signed a two-year, $1.15 million per year deal with the Stars.