GRNews
GreekReporter.comAustraliaAustralian Minister asks the return of the Parthenon Marbles

Australian Minister asks the return of the Parthenon Marbles 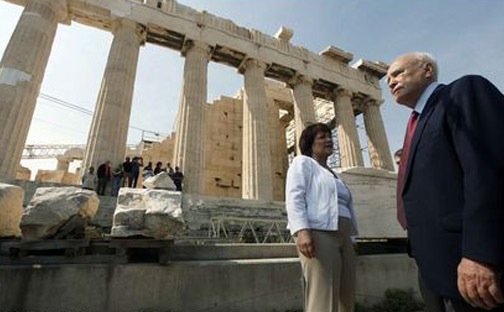 By Kosta Nikas
NSW Parliament has not always been known for great oratory and well crafted rhetoric, but that all changed last week, when Minister for the Arts, Ms Virginia Judge, during a private members speech made a passionate plea, calling for the British Museum to return the Parthenon Sculptures to Greece. Present in the public gallery, was the President of the international committee for their return, Mr David Hill.

“I have followed the issue of the Parthenon for many years now. Many of my constituents have repeatedly expressed their concerns to me, at many cultural events I have attended. This year, at the Greek National Day and Greek Festival of Sydney celebrations, many Greek Australians approached me and expressed their dissatisfaction at the lack of activity on the political front. It’s an issue that concerns all of us, as we are all engaging in cultural initiatives with social, ethical, and political sensitivities that impact on our local communities. The implications are far reaching, and affect all of us” says Judge.

Ms VIRGINIA JUDGE (Strathfield—Minister for Fair Trading, Minister for the Arts) [5.37 p.m.]: Today I highlight an issue raised by a large number of constituents of Greek descent in my electorate of Strathfield. It concerns the return to Greece of the Parthenon sculptures currently held in the British Museum. The Parthenon, one of western civilization’s greatest works of art and architecture, is a religious temple, built in honour of the Goddess Athena by the people of a city that, 2,500 years later, still bears her name—historic continuity that only a few nations in the world can claim today. The Parthenon has become the imprimatur of Western civilization, the symbol of perfection, the reference point for human achievement and the language of excellence.

Through the ages the Parthenon was impacted by wars and revolutions, but one of its darkest moments in history was in 1801 when Thomas Bruce, the Seventh Earl of Elgin, began sawing off and ripping away a substantial number of the sculptures. In England, Lord Elgin was labelled a vandal and a thief by many of his peers, including the famous poet, Lord Byron. Later, due to financial difficulties, he sold the sculptures to the British Government for £35,000, which, in turn, handed them to the British Museum, where they are still kept in a foreign landscape under a grey sky, in a gloomy room. The legality of the sale has always been questioned, given that there was never any evidence of permission for their removal in the first place—permission, I might add, that was sought from the Ottoman Turks, who were an occupying force in Greece at the time.

If we agree with the Code of Ethics of the International Council of Museums, ownership of material culture, which is the result of a transaction with an occupying force, in itself is questionable and unethical. Lord Elgin removed a staggering amount of panels and sculptures, including 247 feet of the Parthenon Frieze. What he removed represents more than half of the surviving sculptural decoration of the Parthenon.

Greece now has one of the world’s state-of-the-art museums, the Acropolis Museum, which sits at the foot of the Acropolis hill, under the bright Attic sky. It was specifically designed to house the Parthenon sculptures. If returned, visitors would be able to see the entire frieze, with its parts assembled for meaningful viewing in context to the original structure, landscape and location. Time and time again polls in Britain and around the world have demonstrated that the overwhelming public sentiment is in favour of returning the sculptures to Greece. Organisations throughout the world have been set up with a mission to advocate the return of the sculptures to their rightful, meaningful home, as have many parliaments and world leaders.

I am proud to say that one such organisation in Australia leading this noble cause is the Australians for the Return of the Parthenon Sculptures Association, which is a member of the International Committee for the Reunification of the Parthenon sculptures. Under the stewardship of its excellent chairman, Mr David Hill, who also chairs the international committee, the association has been working towards this end, as have other local organisations in New South Wales. I commend them for the leading role Australia is playing in this international movement. The arguments that the British Museum has made up until now for retaining the sculptures are no longer valid.

The Parthenon sculptures are symbolic of the intellectual heights humanity has reached through the ages in its pursuit of perfection, excellence and noble ideals. It is time for the British Government and the British Museum to seize this opportunity and adopt those same ideals by returning the Parthenon sculptures in its possession. It would be a gesture directed not only at Greece, but also to all our common values, ideals and aspirations as civilized people. I conclude with the words of Lord Byron, who responded to Elgin’s barbaric act with the poem Childe Harold’s Pilgrimage:
Dull is the eye that will not weep to see
Thy walls defaced, thy mouldering shrines removed
By British hands, which it had best behoved to guard those relics ne’er to be restored.
Curst be the hour when from their isle they roved,
And once again thy hapless bosom gored,
And snatch’d thy shrinking gods to northern climes abhorred!

ACTING-SPEAKER (Mr David Campbell): I acknowledge the presence in the gallery of David Hill.

Mrs BARBARA PERRY (Auburn—Minister for Local Government, Minister for Juvenile Justice, Minister Assisting the Minister for Planning, and Minister Assisting the Minister for Health (Mental Health)) [5.42 p.m.]: I join the Minister for the Arts in recognising the effort, led by people such as David Hill. The Parthenon sculptures should be returned to their rightful owners and rightful lands. I commend the Minister for bringing this matter to the House tonight, which I hope will highlight its importance to the Greek community. I thank the Minister for her passionate work for this cause. If there is anything I know about multicultural communities, indeed all communities, it is that they love their history, particularly the Greeks. This missing link to their history must be preserved in the appropriate hands. I thank the group involved with David Hill. The Greek community supports this cause and I hope the message from this Parliament will be heard in Britain.