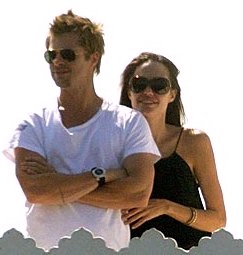 According to the Greek newspaper Espresso, star couple Angelina Jolie And Brad Pitt bought a summer home in Santorini Greece. The newspaper is citing a local lawyer who appears to be the couple’s attorney on the island and is acting on their behalf. The couple went to the island on a weekend retreat during the Cannes festival and had looked at several properties on the market.

As the Greek paper reported, the couple’s attorney signed the contracts for their new family home on the Aegean island three days ago, and said that they are planning to spend some of the summer in Santorini.

The house is built on a large lot which has even a heliport, and Locals say the house looks more like a castle.

The exterior has the standard design of Greek island architecture and is painted in the traditional white and blue colors.

The structure is  located on the road to the village of Oia,  includes two pools and an open theater.