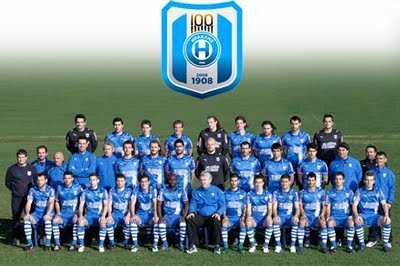 Iraklis will be playing Super League football next season after a Hellenic Football Federation (EPO) appeals panel ruled by 2-1 votes that the Thessaloniki club had fulfilled all the criteria necessary.
Iraklis had been told last month that they could not take part in the Super League because of outstanding debts, which meant that they did not have the necessary paperwork.
However, this sparked a high profile campaign by the debt-ridden club and its fans in particular to persuade EPO to overturn the decision. Fans protested in their thousands in Thessaloniki and Athens and stormed TV studios during live programs to state their case.
In its brief statement, EPO said that it accepted Iraklis’s appeal but that it would fine the club 150,000 euros, without giving any more details.
Iraklis and its fans felt that the club was being made a scapegoat and highlighted the fact almost all the clubs in the Super League have serious financial problems and that if UEFA rules were applied, hardly any of them could play in the championship.
“Nobody can defeat Iraklis supporters,” the club said in a statement. “Nobody can play games with the history and standing of our club. Nobody can celebrate what should have been a given.”
Iraklis now face the task of rebuilding their squad, which has been decimated over the summer as many players, such as Denis Epstein, were released because of the doubt about the team’s future.
Josef Bubenko, who saved the club from relegation on the field last season, is due to take his first pre-season training session on Tuesday.
(source: sport in greece)