GRNews
GreekReporter.comGreeceThe Party at Battleship ‘Averof’ that Shook the Nation

The Party at Battleship ‘Averof’ that Shook the Nation 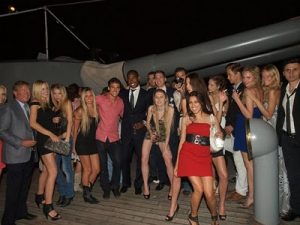 The wedding reception of Marietta Chrousala and Leo Patitsa, part of the Lemos family, on the battle ship and national symbol Averof, brought the Greek Navy right into a wavy storm.
Political and military leaders are found speechless after seeing the pictures published last Sunday at ‘Proto Thema’ and from the rest unpublished photographs that are in the possession of the Navy and are revealed today form the newspaper ‘Ethnos’.
Defense Minister, Evangelos Venizelos, said at a news conference, that the party that took place at Averof is “a provoking incident.” Mr Venizelos said, “This is an offence towards the validity and honor of the Armed Forces, an insult towards patriotism.”
According to the Minister of Defense, the ship-owners party with models on Averof, a symbol, is described as “a cosmic musical aesthetic expression of restrained taste,” it shows that our society is very” superficial and often a captive of power and wealth.”
The Navy, ‘GEN’, according to official correspondence, gave permission for an event to take place – a tribute to the 100 years of the battleship Averof, as part of the annual celebrations of “Posidonia 2010”.

Yet, the photos invalidate every excuse presenting the reception as a typical event of a shipping company incorporated with ‘Poseidwnia 2010 ‘. The marriage bouquets which decorated the whole of the battleship ‘Averof’, the buffet with sugared almonds and models receiving guests, suggests the real reason of the onboard fiesta, which was anything but a tribute to the glorious history of ‘ Averoff ‘.
The Navy published the letter of authorization for the event – a tribute to ‘Averof’ as part of the “Posidonia 2010”, which was later, converted into a wedding reception license.
What, reportedly, infuriated the Minister of Defense was the title role in the wedding reception of the Commodore Ev. Gavalas, as shown through photos.
The excuses given from Commodore, Ev. Gavalas, did not convince the Navy nor the Ministry of Defense, and so, was removed from the battleship Averof and automatically put into retirement.