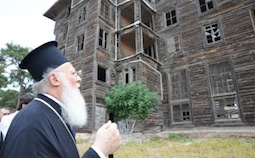 The European Court of Human Rights makes a decision recommending Turkey to give the ownership of the Büyükada Orphanage back to Fener Greek Patriarchate. The court also orders Turkey to pay 26,000 euros to the Patriarchate for lawsuit-related expenses. The wooden historical orphanage, damaged at a fire 30 years ago and has been a hot debate in Turkey
The European Court of Human Rights has decided Turkey should transfer the legal title of the Büyükada Orphanage historical building to the Fener Greek Patriarchate.
The court also ordered Turkey to pay the Fener Greek Patriarchate 6,000 euros for non-pecuniary damage and 20,000 euros for costs and expenses. The wooden historical orphanage is located on Büyükada, the largest of the Prince’s Islands on the Marmara Sea.
The court recalled its decision on July 8, 2008, which said Turkish authorities were not entitled to deprive the applicant of its property without providing appropriate compensation. The court said, “the church had not received any compensation and it had therefore had to bear an individual and excessive burden, entailing a violation of Article 1 of Protocol No. 1 [property protection].”
It is Europe’s largest wooden building and the second largest in the world. Built in 1898 originally by a French company to run as a grand hotel with a gambling casino, it failed to receive permission from the Sultan Abdulhamid II. It was eventually bought by Eleni Zarifi of the prominent Greek banking Istanbul family, who donated it to the Fener Greek Patriarchate to be used as an orphanage. The sultan himself helped the cause of housing by a generous gift of 146 gold pieces.

The Büyükada Greek Orphanage housed Greek orphans from 1903 until 1964 when it was transferred to the nearby Heybeli Island. The imposing wooden building in Büyükada was left abandoned and eventually suffered further damages by a fire in 1980.
The proprietary status of the Greek Orphanage has been a subject of a hot debate between the Greek Patriarchate and the General Directorate of Foundations, a powerful state institution in Turkey, which has been dealing with the fate of 2,235 properties owned by 147 minority foundations in Turkey, according to a recent report.