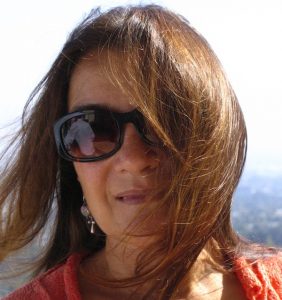 Greek-Portuguese producer, Susana Lagudis along with husband and business partner, Carlos DeMenezes started the Red Umbrella Production company, and are moving ahead at full throttle with their new project. The film is set with the title “Condition of Anonymity” and is currently casting and in the pre-production stages. Susana talks to us about what it takes to be a producer in Hollywood, about her new film, and reveals that she can’t get away from her Greek half.

What part of Greece is your family from?

My Grandfather, Stamadianos Lagudis, was from the town of Pyrgi, on the island of Chios.

Have you been to Greece? If yes, do you go often?

I have unfortunately been to Greece only twice – once as an exchange student for a summer when I was in High School, and once with my parents, when we finally made it to Chios and to the unique town of Prygi, where my family is from.

How connected do you feel to your Greek heritage?

Even though I do not speak Greek, nor does my father, we have always felt a great affinity for Greece. My father’s father died when my father was only 3 years old, so he didn’t grow up with much Greek influence, but he had his last name, his handsome Greek looks, and his logical and philosophical mind, which I think he always attributed to his Greek heritage, an important part of his identity.

Growing up, my mother, who is of Portuguese descent, always prepared lots of lamb, spanakopita, moussaka and many other Greek foods and sweets, to remind us of where we came from. The OB/GYN who delivered me, my two brothers and one sister was Dr. Nicholas, and he took us many times to the Greek Festivals at St. Sofia’s when we were growing up; we enjoyed the dancing, the food and the crowds, all of which seemed very familiar and comforting.

I think we felt that knowing we were part Greek helped us to understand many things about our temperaments and our close family life, which was so very different from all the Anglo-American families we grew up surrounded by here in Southern California.

Have you ever tried/ would you want to produce a film in Greece?

Who wouldn’t love the opportunity to produce a film in Greece?!? The visuals, as everyone knows, are stunning, and the stories that come from the land and the people are timeless and universal.

How did you begin your professional career as a producer?  Did you start in another profession?

I have always been a film buff, but never imagined I would end up in this business. I actually started off in academia; I was working on my Masters degree in Sociology at UCLA, and I had a lot of friends who were making films, both documentary and fictional. Since I was very organized, I began helping to produce their senior projects, and one thing led to another. Because of my language skills (I am fluent in English, Spanish and Portuguese) I started working at an independent production company that was producing three programs for broadcast for primetime on Univision, the largest Spanish-language channel in the United States, and soon after became the Director in Charge of Production on all three weekly shows. I continued to produce in the area of entertainment television, marketing, sales and promotions, for both domestic and international distribution, and eventually worked my way up to Executive Producer.

At the same time, I was working on a documentary feature with my husband, Carlos DeMenezes, who directed, produced, shot and edited this internationally award-winning film, “Trespassing.” We formed Red Umbrella Productions, an award-winning, full service film and television production/post-production company for unique, forward thinking creative work that entertains, communicates and motivates, in 1994. 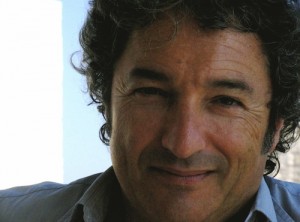 Do you think it is better for somebody who wants to become a producer to go to school or use the money to make his/her first film?

That’s a very personal call, but the importance of getting a good education cannot be underestimated – it is your foundation for life. If you have a passion project, you will find a way to make it happen along with your studies or your day job – I’d say don’t spend your college money on your first film – go to school AND make your movie.

What are the challenges you face as a producer in Hollywood?

The biggest challenge is to maintain momentum, to stay in play. It’s important to have a community of like-minded people around you, those who share your artistic sensibilities and vision, who you know you can trust.

What do you look for when searching for actors to participate in your productions?

Casting is a very interesting topic – I think it’s highly subjective, and yet in practical terms it must be highly objective. So, while you may be looking for a specific type, or someone who connects to the material, or projects a certain image, you also have to consider who can you cast to bring a certain type of audience, or interest and money for financing, to your film.

What has been some memorable experiences of your career?

Screening “Trespassing” to audiences at film festivals all over the world brought so many memorable experiences it’s hard to choose. Screening “Trespassing” to a full-capacity crowd (395 seats) at the Pacific Design Center Theatre, an event sponsored by Film Independent (FIND), stands out not only for the overwelming audience reception, and lively discussion after the screening, but also for the presence of two busloads of Native people who drove all the way from the California-Arizona border to attend. Once the film was over, many of the elders and members of the Ft. Mojave and Colorado River Tribes joined Carlos and me on the stage, overcome with emotion at seeing their lives and their struggle up on the big screen for the first time. Young Native people in the audience reacted with tears and pride, and thanked us for telling their story.

Another was certainly winning Best Picture at the VIII Raiz de la Imagen Indigenous Festival of Film & Video in Oaxaca, Mexico.  After a thoroughly stimulating week of participating in this unique festival experience, we were escorted to the front row of the Opera House in Oaxaca City for the closing ceremonies. On the stage was the international jury, made up of indigenous scholars and filmmakers from all over the world. A clip from “Trespassing” appeared on the screen, to great applause, and in Spanish and Zapoteco, an indigenous philosopher and poet described our documentary as sublimely portraying the struggle between good and evil, between light and darkness, between Mother Earth and man-made destruction. We were called up to the stage and presented with a hand woven tapestry commissioned from a local master weaver – the audience and our fellow filmmakers cheered, and whistled and stamped their feet to congratulate us.

Beyond Tresspasing, some other fond memories include: seeing a promo spot that I Executive Produced for “Lost” air on the Super Bowl and seeing several “real people” Ford commercials I field produced and directed air on “American Idol”.

What are you currently working on? Any future projects?

My husband and partner in Red Umbrella Productions, Carlos DeMenezes, and I are currently in pre-production on a feature, “Condition of Anonymity,” for which Carlos has written the script – he will also direct. In “Condition of Anonymity,” a honeymoon couple arriving in Los Angeles for a vacation gets in a car jacking accident, leaving the husband in a coma and the wife, having lost her memory, wandering through the unknown landscape. The accident actually happens only in the head of the protagonist as he undergoes cancer treatment, and his imagination exposes the fear of losing his lover.

The script has been extremely well received by several independent producers who have expressed great interest in getting financing together to make the film. We have had two very successful stage readings, and have been actively pursuing casting and financing options both domestically and internationally for the project.

On board we have Alfonso Beatto, the award-winning Director of Photography on films such as Pedro Almodovar’s Oscar-winning “All About My Mother” and “The Flower of My Secret”, to Walter Salles’ “Dark Water” and Stephen Frear’s Oscar-nominated “The Queen”, with Helen Mirren. We are also fortunate to have as our Production Designer Brent Boates, the Oscar-nominated Visual FX Art Director for “Die Hard” who has worked on “Alien 3,” “Batman Returns,” “The Hunt for Red October,” “Men in Black,” “Fantastic Four,” and Watchman,” among others. In addition, we will be re-teaming with Aldo Schllaku, the award-winning composer on “Trespassing,” who is also co-producing. Our Executive Producer Chris Panizzon is Anne Clements, who won both Best Picture at Sundance and the Independent Spirit Award as a producer on “Quinceanera”.

Future projects include two feature films, both written by Carlos DeMenezes, one of which will be co-produced and shot in Brazil. The other could be adapted to almost any country – why not Greece?