The world known RnB singer, Rihanna, sang last night at Karayskaki stadium leaving all of her fans breathless with her appearance.
The concert was opened by the Greek group named ‘Vegas’, where they started up the party before Rihanna walked the stage.
Fans anxiety rose to its peak while waiting for her to hit the stage. The lights turned down low, and the RnB star took the stage starting with the song called “Hard”. Further on, big hits such as “Rude Boy”, “Please Don’t Stop the Music”, “Rehab” and “Unfaithful” took the fans by storm.
Rihanna, impressed the crowd with her voice and performance. All of the fans sang and clapped along with the sexy performer. 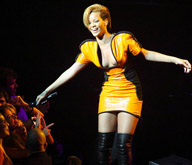 The night’s staring moment was when Rihanna rapped up her performance with the song “Umbrella” and instead of lighting lighters, everyone opened their umbrellas.
Greek celebrities, who are also huge fans of the singer, attended the concert. Celebrities such us, Despina Vandi, Elena Paparizou with her boyfriend and Tatiana Stephanidou with her husband Niko Evagelato and their children attended the show.

Greek PM Mitsotakis vowed to strengthen the national health system during a meeting on the epidemiological situation in Attica and the rest of the country.
Ancient Greece

The Greek word "kosmetika" is the root of the English word ‘cosmetics.’ The word also meant any product that protected the hair and face.
Greece

Prime Minister Kyriakos Mitsotakis praised the country's vaccination program, referring to a "wall of immunity" against the coronavirus.