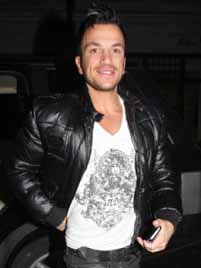 Singer reaches out to Chezza on his new TV show
Peter Andre thinks Cheryl Cole could do with a little Greek loving.
Hosting his first episode of Channel 4’s 5 O’Clock Show, Peter asked guest Louis Walsh, 57, how fellow X Factor judge Cheryl was doing since her split from Ashley.
‘She looks amazing,’ Peter, 37, told the Irishman. ‘I think she needs a nice Greek guy!’
Louis is sure that Chezza is going to be all right – with or without a hug from Pete, who was born to Greek Cypriot parents and named Peter James Andrea.
‘Cheryl will be fine,’ Louis responded, ‘she’s got a great career.’
Cheryl, 26, filed for divorce from Ashley last week following a string of allegations he cheated on her.
The Girls Aloud star has just launched a new range of branded products, including a tote bag, featuring just the name Cheryl – the surname Cole does not appear on the merchandise.

Some of Melbourne’s top landmarks will be lit up in blue and white to commemorate the declaration of the Greek War of Independence 200 years ago.
Greek Food

Greeks and Turks have been at each other’s throats for centuries, but a rivalry seldom mentioned revolves around the origins of baklava.
Greek News