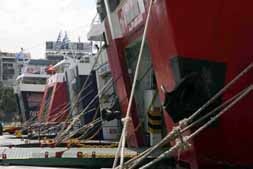 Workers in Greece’s main ports Piraeus launched a 24-hour strike against the governments decision to lift restrictions on vessels with foreign crews docking in Greece, union and state officials said.
At least five cruise ships were expected in Piraeus and may be prevented from leaving or disembarking passengers due to protests.
Greece’s government said in April that the Mediterranean country would allow non-EU-flagged ships with non-Greek crew to moor at its ports and travel between Greek islands, in order to boost tourism.
The move was seen as a first step toward liberalising Greece’s labor market and boosting competitiveness. The government, fighting a debt crisis that has rocked Europe, has stirred angry protests by embracing austerity measures.
Shipping companies were previously restricted to hiring Greek crews, and even EU-flagged ships did so in practice to avoid protests and labor stoppages.
“We are protesting against the government’s policies. We have to protect our rights and our jobs. It’s not a protest against tourist arrivals in Greece, but they can’t throw Greek seamen onto the streets. They are also offering a lot to the economy,” ” said Yannis Halas, general secretary of the Panhellenic Seamen Federation.
759 passengers start cruise in Malta because of Athens strikes
759 Pullmantur cruise passengers who were due to start a cruise in Athens were today flown to Malta instead because of strikes in the Greek capital.
Two Pullmantur Boeing 747s and a Spanair Airbus landed at Malta International Airport earlier this afternoon bringing the passengers from Madrid. They were taken straight to Grand Harbour from where they started their Mediterranean cruise.
The same aircraft will be leaving MIA later on today with a total of 582 passengers who disembarked the cruise ship Zenith, on their way back to Madrid.