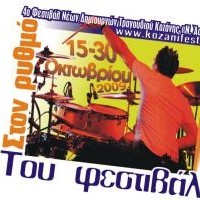 The Kozani Municipal Company for Culture – Sports and Social Policy is bound to proceed to the organization of the 1st Hellinophone (Greek Speaking) Festival.
The Festival which is set within the framework of the 5th Festival of Kozani will be held on the 30th of October 2010, whereby music groups from all over the world are invited, provided that they will premiere at least one song in Greek, written by a lyricist who will either be a non-Greek student of Greek Language or coming from Greek speaking populations outside Greece.
The bands which will be selected to perform in the Hellinophone Festival, must also present a musical programme of their choice.
The Kozani Municipal Company for Culture – Sports and Social Policy will cover all accommodation, nutrition and transportation of the bands which will participate. Monetary awards are not planned.
Applications will be accepted until the 12th of September 2010.
Applications must be sent through e-mail at the address: [email protected] and must include the following information:
1. Name, phone and contact address of the representative of the music group
2. Country and City of origin of the group
3. Their entry song in mp3 format and
4. The name of the lyricist
Contact telephone numbers:: 0030-24610 23356 – 0030-24610 29843
Web site: www.kozanifest.gr