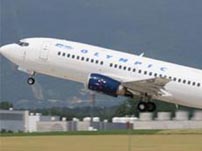 Under the agreement, Olympic Air will offer flights and tickets for the Athens–Abu-Dhabi–Athens routes operated by Etihad Airways (EY), as well as for selected long-haul flights operated by EY beyond its  Abu-Dhabi home base to Johannesburg, Cape Town, Sydney and Melbourne.  In turn, Etihad Airways will offer tickets for flight services operated by Olympic Air between Athens and Rhodes and Thessaloniki in Greece, the Romanian capital Bucharest, and the capital of Bulgaria, Sofia. This cooperation is effective for sales from 15th May and travel from 18th May, 2010.

Olympic Air (OA) is a new airline, registered in Greece, born from the acquisition of formerly state-owned flag carrier of Greece, ‘Olympic Airlines’, by Marfin Investment Group, in April 2009. Olympic Air launched scheduled operations on September 29th, 2009, carrying over the historic name and logo of ‘Olympic Airlines’ embodying a dynamic, modern approach to the company’s management and operation. Olympic Air boasts one of the youngest fleets in Europe, which consists of 16 Airbus Α320s and Α319s, 9 Bombardier DHC8-Q400s, 5 Bombardier DHC8-100s and 1 ATR-42.

Etihad Airways is the national airline of the United Arab Emirates based in the UAE’s capital, Abu Dhabi. The airline offers flights to more than 60 destinations in the Middle East, Europe, North America, Africa, Asia and Australia. In 2009, Etihad won the “World’s Leading Airline” award.