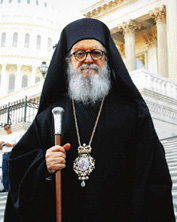 In discussing the upcoming Assembly of Canonical Orthodox Bishops in North and Central America, to be convened by His Eminence Archbishop Demetrios of America in New York City, May 26-28 Archbishop Demetrios explained that the nature of the assembly is as “a temporary, not a permanent institution at the May 7 meeting of the Archdiocesan Council in Atlanta. It is simply preparatory to facilitate the process of an ecumenical council (in the future) that will decide the final form of the existence of the Church in a particular country.” His Eminence further explained that the assembly is to meet annually and is not a continuation of SCOBA. Rather, it works to “prepare a plan for dealing with anomalies, such as more than one bishop in a given locale and other things that interfere with the life of the Church.” It is also designed “to project a unified witness of the faith.” As such, the Archbishop called the work of the Assembly “tremendously important. The function and outcome of this first meeting will determine how it continues in the future.”