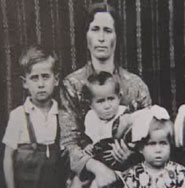 Utah’s Greek community is honoring a family for their contributions to Salt Lake City.

The Katsanevas family immigrated to America from Greece. And while you may not know them personally, their prominent businesses are well known in Utah .
Crown Burgers, for instance, is one of them.
Their story is, as they say, a dream come true to be living in America.
Their story in America dates back to 1947, when Mike brought his young family to the U.S. and later to Salt Lake City in 1954, where they have made their home ever since.
They started in America with nothing, arriving at the end of World War II. “That was my first pair of shoes, when I was 11 years old. It was a real treat,” says Mike’s son Louie Katsanevas (foto).
But a few years of poverty here turned to success through a lot of hard work and their culture of hospitality. 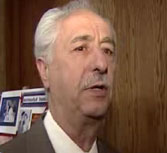 “When I came here, at first, it was tough,” says Louie. “I couldn’t speak English, I had to learn and I had to work. It was tough at first, but the next few years everything came naturally. You make friends, you start work, get married, have kids and a family.”
Sunday at the Greek Orthodox Cathedral, the Katsanevas family was honored for 55 years of contributions they have made to the Greek community and also Utah.
“Our grandparents came here and worked terribly hard and left for us a good family name,” says grandson Ted Sargetakis. Granddaughter Angie Katsanevas says she’s grateful for her heritage.
“I am proud of being a Greek girl. I’m very proud of how we were raised. I’m very proud of the strong culture we have behind us,” she says. The New York Times recognized Crown Burgers last year as one of the best burgers around. According to the next generation, the family’s success is not from their hamburgers — it’s their heritage, traditions and culture.
“Greeks are known for their hospitality and truly, regardless of what industry you are in, as a Greek, hospitality comes first,” Michael says. “And when people come first, success follows.”
That success is more than the family members who immigrated here nearly 60 years ago ever dreamed of.
“I have a really nice family, extended family, immediate family. I live the life of my dreams in America,” Louie says.
The Greek community honors one family each year for overcoming the obstacle of immigrating, finding success in the U.S. and continuing to honor their Greek traditions.
Beyond Crown Burgers, the Katsanevas family is involved in beauty salons, a jewelry store and other small businesses.
(source: ksl)