“Ancient Greece: A History In Eleven Cities” by Paul Cartledge 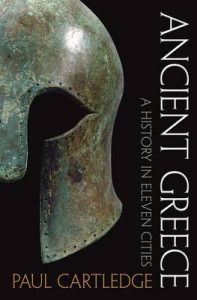 Paul Cartledge, professor at Cambridge University and honorary citizen of Sparta, started learning ancient Greek at the age of 11 in 1958. His new book, “Ancient Greece: A History In Eleven Cities”, gives an introduction to the history of Greek civilization by providing a synopsis of 11 citizen-state communities of Ancient Greece (Cnosso, Mycenae, Argos, Miletus, Massalia, Sparta, Athens, Syracuse, Thebes and Alexandria).

This book gives an in depth perspective of the geographical significance ancient Hellas had, which Cartledge says stretched from Spain to Georgia, and even as far east as Afghanistan and Pakistan, after Alexander the Great. In addition it aims to show us “how much of today’s Western culture is owed ultimately to the ancient Greeks.”

You are a world expert on Sparta and Athens. How were Spartans different from other Greeks? “Their attitude towards life and death. They had no compunction about infanticide of the weakly or deformed infants, but equally they were prepared to sacrifice their own lives at Thermopylae . The women were supposed to be glad, not grieve, when their male relatives died in battle for their country.”

What is it about Sparta or the Spartan culture that you admire the most? Their ‘true grit’ (to quote a John Wayne movie). Only the Spartans could have dared to resist the Persian invasion as they did in 480 BC, which was their major service to western civilization. The Spartan women were pretty extraordinary too, like princess Kyniska, the first woman to win an Olympic crown (for the 4-horse chariot-race in 396), and the women collectively, who somehow had to cope with the most masculine men in Greece. Otherwise I quite strongly dislike many features of Spartan culture and society, especially their brutality both amongst themselves and towards their servile class of helots.

What is something most people do not know, and you find extremely interesting, about ancient Sparta? Good question! Here’s an ancient Greek joke:The Spartans were famously deferential to senior citizens. So, for instance, younger men would leap up to give their seat to an older man in any public place or gathering. Once a Spartan was visiting another Greek city and spied a toilet (something the Spartans allegedly didn’t have at home), whereupon he exclaimed, “Never let there be in a seat in Sparta from which I can’t get up and offer it to an older man!” This is a satire (probably Athenian) both on the Spartans’ gerontolatry and on their primitive material culture.

You were consulted for the blockbuster film 300. What did they get dead on? What was depicted incorrectly? “I was consulted only in a very minor way and had nothing to do whatsoever with the screenplay (by Frank Miller). I was asked how to pronounce ‘Leonidas.’ I suggested LeonEEdas, they went for LeonEYEdas, which shows how much my consultancy counted. The movie was technically brilliant and captured the Spartans’ gallows humor but was borderline racist in its representation of the Persians as animalistic and their king Xerxes as a piercings-addicted drag queen.”

What is your favorite Greek restaurant in England? Konaki on Coptic Street in London, not far from the British Museum.

Cartledge has been teaching at Cambridge for over 30 years, and has been an AG Leventis Professor of Greek Culture since 2008. He fell in love with ancient Greece at the age of eight after reading children’s versions of the Iliad and the Odyssey, and was a student at St. Paul’s School of London and Oxford University.

Cartledge’s next piece of literature will be based on his most recent course, “Ancient Greek Democracy and its Legacies.” More information about Paul Cartledge can be found at www.classics.cam.ac.uk