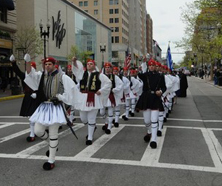 THEO DORGAN (foto), one of the great keepers of the Grail of Irish poetry in the current era, makes all his interests work together in this stunning new book. At first glance the Greek in question is Ulysses – not surprising from the author of the wonderful seafarer’s book Sailing for Home , Dorgan’s prose account of a transatlantic voyage under sail.
Ulysses is indeed prominent here, especially in the third of the book’s three sections, “Sappho’s Daughter” (a version of which was already published to acclaim in 1998). But there are other fundamental Greek myths here, too, all lightly and artfully updated.
Most notable is the brilliant antiphonal pairing of poems on Orpheus and Eurydice, which keep questioning their myth. “What if” Eurydice was happier in the underworld with her freedom from Orpheus? “What if” she gave him just one last chance, on the understanding that if he trusted her he would not turn back to check? “And of course, he turns”; “The Maenads got it right: he let her down.”

This is a beautiful example of what Dorgan does so well: the linking of a deeply serious tale for our times – the importance of marital trust: my phrase is already guilty of a lumpish prosiness that he would never descend to – with a cool, knowing humour. The twinned poems have a perfect palindromic form, section by section, even to the reversal of the dedications ( Orpheus “for Ciaran and Deirdre” becomes “for Deirdre and Ciaran” in Eurydice ). This instance might sound trivialising, but it is typical of the unpretentious care that has been taken with all aspects of form in the book.
The most important Greek for this book, in fact, is not classical at all: it is Cavafy, the great modern poet of the cool and knowing. Of the book’s three sections, the dominant Cavafy-like tone is most sustained in the second section, “Islands”, where the sailor-narrator is home from the sea, watching the world go by with a good-humoured, kindly but shrewd eye.

Some of the best of these lyrics have a disturbing word of warning in them: Inland, for example, is “the perfect place for grief / to lie coiled in ambush”, or the brilliant six-line Alexandros . A woman calls this boy by name and he enters, “a carefree, sunny child, all smiles and puppy fat”. But we search his eyes, “we who have seen tyrants in their youth before now.” This lightness of the everyday, with its undercurrent of the ominous, is entirely in place in a Greek context. You can only marvel at the easy accomplishment of the imagery, and how lightly the reader is arrested by it:

“A table beside the evening sea
where you sit shelling pistachios,
flicking the next open with the half-
shell of the last, story opening story,
on down to the sandy end of time.”

The image looks easy, but it is the product of a well-schooled imagination. Another inspiration, Thomas Wyatt, who has this gift pre-eminently, is twice invoked: his “new fashion of forgetting” in Orpheus describes the spirit of Greek.
The book, of course, is not only about Greece or the Greeks. A modern Olympian from Cobh is unforgettably evoked in a poem that has already become celebrated, Running with the Immortals , for Sonia O’Sullivan: “an ordinary girl, head down, keeping time with her shadow.”

The poem comes back to mind later in the book in Spirits as a young Artemis in T-shirt and blue jeans “stalks past, imperious and aloof, / radiant in her first flush of immortality”. For all its lightness, this is wisdom poetry, a genre to which seafaring has always been central and to which Dorgan’s epigrammatic skill is entirely suited: “To live your life is not so simple as to cross the sea.” But Dorgan’s great gift is to make it seem precisely that simple, and yet of total importance – as, of course, it is.