Costa Georgiadis is a Logie Nominee 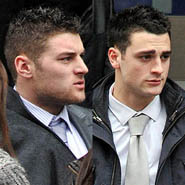 Greek – Australian Costa Georgiadis (foto), host of Costa’s Garden Odyssey, and fashion designer Alex Perry of Australia’s Next Top Model have been named in the preliminary list of Logie nominees.
Also appearing on the list are George Houvardas for his role as Carbo in Packed To The Rafters, Ada Nicodemou for her role as Leah in Home and Away, Zoe Ventoura for her role as Melissa in Packed To The Rafters, and George Calombaris, for his role on Masterchef.
Georgiadis, whose avante-garde garden show has only run for one series on SBS has been nominated for his role as a presenter and also for new talent.
Big names such as Rove McManus, Rebecca Gibney, Bert Newton, Eddie McGuire, Dannii Minogue, Sam Newman and Shane Bourne are also on the early list.
The 2010 Annual TV Week Logie Awards will be held at Melbourne’s Crown Casino on Sunday May 9th.
The nominees will be announced following the official Nominations Breakfast on March 29.
(source: neos kosmos)