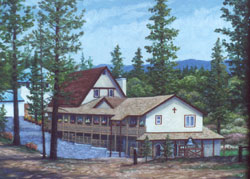 More than 400 people gathered on February 4 in Washington D.C. for the opening reception of a historical photographic exhibit about Mount Athos presented by “National Geographic”, titled: “Called to the Holy Mountain: Mount Athos,” according to Dr. Zoe Kosmidou, Minister Counselor of Cultural Affairs for the Embassy of Greece and U.S.A. Representative for the Hellenic Foundation for Culture.
The exhibit marks the beginning of a series of scientific and historical collaborations between Greece and National Geographic, whose television programs are watched worldwide and which produces the magazine reportedly reaches 370 million readers monthly. The public, according to Kosmidou, was in awe of the exceptional photographs accompaning the essay, which was presented by Draper and photographer Travis Dove, on the monastic life of the Holy Mountain.

The holy peninsula of Mount Athos reaches 31 miles out into the Aegean Sea like an appendage struggling to dislocate itself from the secular corpus of northeastern Greece. For the past thousand years or so, a community of Eastern Orthodox monks has dwelled here, purposefully removed from everything except God. They live only to become one with Jesus Christ. Their enclave—crashing waves, dense chestnut forests, the specter of snowy-veined Mount Athos, 6,670 feet high—is the very essence of isolation.

Living in one of the peninsula’s 20 monasteries, dozen cloisters, or hundreds of cells, the monks are detached even from each other, reserving most of their time for prayer and solitude. In their heavy beards and black garb—worn to signify their death to the world—the monks seem to recede into a Byzantine fresco, an ageless brotherhood of ritual, acute simplicity, and constant worship, but also imperfection. There is an awareness, as one elder puts it, that “even on Mount Athos we are humans walking every day on the razor’s edge.”

They are men—exclusively. According to rigidly enforced custom, women have been forbidden to visit Mount Athos since its earliest days—a position born out of weakness rather than spite. As one monk says, “If women were to come here, two-thirds of us would go off with them and get married.”

A monk cuts his ties from his mother but gains another: the Holy Virgin Mary (who, legend has it, was blown off course while sailing to Cyprus, stepped foot on Mount Athos, and blessed its pagan inhabitants, who then converted). He forms an intense bond with his monastery’s abbot or his cell’s elder, who becomes a spiritual father and, in the words of one monk, “helps me find my personal relationship with Christ.” The retirement or death of these eminences can be difficult for the younger monks. Conversely, a young man’s decision to return to the world may also be wrenching. “Last year one left,” recalls an elder. “He didn’t ask for my opinion,” he adds, his voice betraying a fatherly hurt, “so it’s just as well that he’s gone.”

Christian monks (derived from the Greek root monos, or “single”) first began forming collective refuges, or monasteries, in the Egyptian desert in the fourth century. The practice spread across the Middle East and into Europe, and by the ninth century hermits had arrived on Mount Athos. Since that time, as civilization has grown more complex, the reasons for distancing oneself from society and turning to monasticism have multiplied. Indeed, after two world wars and communism reduced the monastic population to 1,145 in 1971, the past decades have seen a rebirth. A steady influx of young men—often with college degrees, a number from the former Soviet bloc—has dramatically increased Mount Athos’s ranks to nearly 2,000 monks and novices, while Greece’s entrance into the European Union in 1981 made the peninsula eligible for EU preservation funds.

“There are 2,000 stories here—everyone has their own spiritual walk,” says Father Maximos, whose own walk began in Long Island as a teenage devotee of edgy musical artists like Lou Reed and Leonard Cohen, and who later became a theology professor at Harvard before resigning to “live my life closer to God.”

Many such journeys begin uneasily. An Athens boy sneaks away from his household, and when his brother comes to Mount Athos to fetch him, the boy warns, “I’ll just escape again.” A Pittsburgh grocer’s son stuns his parents with his decision—which, two years later, he acknowledges may be temporary, saying, “I mean, who knows what God has planned?” If the aspirants appear unready, their spiritual father will urge them to go back. Otherwise, the candidate will be tonsured under candlelight: The abbot cuts a tiny cross out of the hair on his scalp, bestows him with the name of a saint, and a monk is born.
Their stories hardly end when they enter Mount Athos. A wayward hippie from Australia named Peter is now Father Ierotheos, an accomplished baritone chanter at the Iviron monastery. Father Anastasios learned to paint here and now exhibits his work in places as far-flung as Helsinki and Granada, Spain. Father Epiphanios took it upon himself to restore the ancient vineyards of Mylopotamos, and today he exports excellent wine to four countries, in addition to publishing a cookbook of monks’ recipes in three languages.

For better or for worse, the monastic brotherhood consists of men who finally cannot help but be who they are, fleshed out beneath their robes. Some are independent by nature and opt to live on their own in countryside cells. Some are small-minded—and indeed, as one monk says, “monastery life can be absolutely consumed with pettiness.” However, the very best of them do not merely radiate goodwill but seek out where it’s most needed. Father Makarios of the Marouda cell near Karyes is such a man, freely bestowing on strangers his spare coat, his spare room, all of the money in his pocket. “With real faith,” the 58-year-old monk with animated green eyes says, “you have freedom. You have love.”

The monasteries are anything but monolithic. The seaside Vatopediou monastery is rich with Byzantine treasures and ambition—among its monks is a full-time music director—while the decidedly agrarian Konstamonitou monastery embraces a rustic lifestyle free of electricity or donations from the European Union. (“You cannot be ascetic with all these easy things,” observes one of its elders.) The monks of Mount Athos did not leave behind their human audacity, attested to by the glorious positioning of Simonos Petras, a monastery suspended high over an infinite seascape as if clinging to heaven’s ladder. Some monks, however, commit to the hermitic barrenness of raggedy huts along the cliffs of Karoulia.

Still others opt for zealotry. Such is the case for the residents of Esfigmenou, a thousand-year-old monastery long tormented by pirates and fires and repressive Ottomans, but now a victim of its own radicalism. Having renounced the Ecumenical Patriarchs’ policy of dialogue with other Christian denominations and hung out a banner proclaiming “Orthodoxy or Death,” the Esfigmenou brotherhood has been cast out by Mount Athos’s ruling body, known as the Holy Community. It now subsists on outlaw defiance and donations from sympathetic corners of the outside world. “We’ll continue our struggle,” declares its renegade abbot. “We place our hope in Christ and the Holy Mother—and no one else.”
To leave Mount Athos for whatever reason is, in local parlance, to “go out into the world.” Of course, the peninsula remains affixed to Earth, and some 2,000 secular laborers share it with roughly the same number of monks. Mount Athos has been part of Greece since 1924. Its local governance resides in Karyes, the dusty capital and depot where shipments from the outside world and newly arrived Eastern Orthodox pilgrims are deposited. (Visitors must apply for a special permit; the Holy Community admits roughly a hundred males for up to four days at a time.)
As the junction between the fixed and the transient, Karyes teems with incongruities: a monk lumbering down the stone pavement with a gnarled cane in one hand and a Nike tote bag in the other; shops selling candles, rosaries, and bottles of ouzo. The police force headquartered here handles the occasional public intoxication or shoplifting case. In addition, the Holy Community—the world’s longest continually functioning parliament—resides in Karyes. Its members pore over matters as large as relations with the EU and as small as who will rent a particular store. Every change on Mount Athos represents a risk that must be weighed.

Mount Athos has survived by bending where it must, though never without fretfulness. St. Athanasios, who founded the Megistis Lavras monastery in 963, infuriated the hermits by introducing audacious architecture into an otherwise rustic landscape. Roads and buses, then electricity, then cell phones have all been sources of angst. The latest encroachment is the Internet. A few monasteries have conducted ever so timid forays into cyberspace—ordering spare parts, communicating with lawyers, obtaining scholarly research. “It’s a great danger to be connected to the outside world,” cautions one monk. “Most of the monks weren’t even informed about 9/11.”

The outside world creeps ever closer. Mount Athos’s newest monks have college educations, laptops, and little experience with raising chickens. Yesteryear’s mules have mostly been replaced by vans and Range Rovers. Worries persist that the European Union donations will continue only with strings attached—such as the insistence that women be permitted to visit the peninsula. In these ways Mount Athos cannot elude mortal preoccupations.
Yet the brotherhood proceeds as it always has: inchwise, turned ever inward, glorying in the unseen—“digesting death,” in the words of one  of its preeminent scholars, Father Vasileios, “before it digests us.”
(Source: National Geographic)