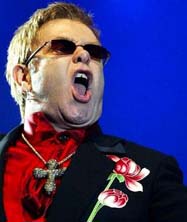 The bishop of Piraeus, Seraphim, has written to Queen Elizabeth II of the UK to complain about recent comments by British singer-songwriter Sir Elton John, in which he claimed that Jesus Christ was a “compassionate, super-intelligent gay man who understood human problems.”
John made the comments in an interview with US Parade magazine last week, sparking outrage from church organizations in America and other countries.
Now Seraphim has called on worshippers in Greece to make their anger known to Queen Elizabeth and Britain’s Foreign Office over what he termed the “unacceptable and absurd” comments made by the artist.
The bishop said Christians around the world are expecting the queen to respond to John’s comments by stripping him of his knighthood. Seraphim also wrote to Britain’s ambassador in Athens, David Landsman, to express the “deep pain and bitterness” caused by the comments.
(source: kathimerini)