19th Annual Leadership 100 Round Up 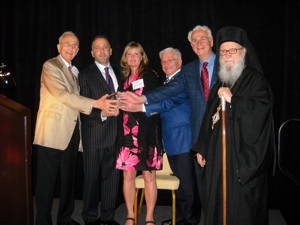 The Hellenic organization, Leadership 100 had its 19th annual gathering on San Diego’s Coronado Island. The event had it all from celebrity attendees to Greek food, forums, dinner- galas, and dancing. The conference that took place at the luxurius “Del Coronado Resort” began on Feb 4th and ran until Feb 7th. The program included speeches from prominent Greek-Americans, such as author George Pelecanos and Dr. Nick Yphantides.

On Saturday night, Ambassador George Argyros received a lifetime achievement award by Archibishop Demetrios during the prestigious ceremony and dinner held in the main ballroom.

The next conference for Leadership 100 will take place in 2011 in Palm Beach, Florida.