TechNews
GreekReporter.com Australia So Greek: Confessions of a Conservative Leftie by Niki Savva

So Greek: Confessions of a Conservative Leftie by Niki Savva 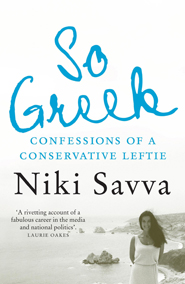 After more than two decades as one of Australia’s most senior political journalists (and a left-leaning one at that), in 1998 Niki Savva ‘crossed over to the dark side’ and became Peter Costello’s press secretary. After six years, she moved to John Howard’s cabinet policy unit. So Greek is her often funny, always opinionated take on those years, and the power play and shenanigans of Australia’s political media. Savva includes her own migrant family story, which doesn’t marry well with the political material, but goes some distance towards explaining her motivations and attitudes-liberal on social policy, conservative on economic policy. The book is strongest when exploring Savva’s relationships with politicians like Paul Keating (which soured after she broke the ‘recalcitrant’ Mahathir story), Howard (in the ’80s she ridiculed his ‘wayward caterpillar’ eyebrows, in 2007 she hugged him after his election loss), and especially Costello. Savva was the person who softened his image–buying him jeans, nagging him to ditch the smirk and, in 1998, telling him to give One Nation last preference in Higgins. That’s all history, but the game continues. This is a great book for students of politics and the media, and for lovers of scuttlebutt everywhere.