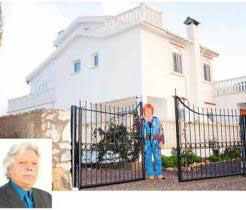 A London court ruled Tuesday that a British couple must demolish their holiday home in northern Cyprus, a decision that could have implications for thousands with property on the disputed land.
Turkey’s foreign ministry criticised the verdict, warning it could compromise the possibility of reunification and long-lasting peace for the island, divided since 1974.
President Demetris Christofias, the Greek Cypriot leader, said the ruling was “legally and politically” important.”
It is “an answer to the (Turkish) side which wants to reject the right of ownership or the use of one’s property,” he told reporters.
Cyprus has been split since Turkey occupied its northern third in 1974 in response to an Athens-engineered Greek Cypriot coup aimed at uniting the island with Greece.
Following the court ruling, David and Linda Orams must now hand the land back to the original owner of the property in Lapithos, Meletios Apostolides, and pay him damages.
Apostolides’ family fled to the south of the island in 1974 and he launched a court action in Cyprus, which was followed by a string of subsequent legal hearings amid disagreements over the case.
But Tuesday’s judgement by the Court of Appeal in London backed the Cypriot court and the European Court of Justice (ECJ) and could set a precedent for thousands of other people who have built holiday homes in northern Cyprus.
“This creates a new legal framework in those cases where foreigners are trespassing on such properties,” Constantis Candounas, Apostolides’ lawyer, said afterwards. “But each case must be decided on its own particular facts.”
The Orams had argued at the latest court hearing that the president of the ECJ, Vassilios Skouris, could have been biased when his court ruled that British courts should enforce the Nicosia court’s decision.
Their lawyers alleged that Skouris had links to the president of Cyprus, who had awarded him an honour.
But appeal court judge Malcolm Pill rejected this, saying: “There was no real possibility that the resident (of the ECJ) would be influenced by the honour he received or by his other contacts.
“The judgement of the court is in no way tarnished by those contacts, considered either individually or cumulatively.”
(source: AFP)

The breathtaking village of Theodoriana, nestled in the Tzoumerka mountain range in Greece, looks like something out of a fairy tale.
Crime

A Greek student in the Italian city of Turin has sustained serious injuries after her former boyfriend stabbed her in the neck and chest.
Greek News