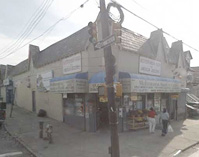 The legendary Greek grocery store, “Mediterranean” of Jamaica, Queens closed.
The last “Mediterranean” store, which operated for over 45 years at Parsons Boulevard, located across from Saint Dimitrios Church, has been taken over by new ownership.
The residents of Jamaica Hills, a neighborhood of Jamaica, were shocked to hear the news. In the early 80’s, Jamaica Hills was dominated primarily by Greeks.
At that time, Jamaica Hills had only three Greek grocery stores, a video store, travel agency, one flower shop, a restaurant, Greek property and insurance agency, and the Jamaica Olympic soccer association. In addition, there was a Greek funeral home that fell into the hands of by non-Greeks.
Today, the only Greek establishments left is Saint Dimitrios Church and school and “Mediterranean”
George Kalozinis bought “Mediterranean” in November of 1986 from Chris Tripolitsoti, who was owner since the late 70’s when Harry Kaloudi sold it to him. The store had opened several years prior in the 60’s, roughly just opposite from the space where it is still located today.
“I am now 67 years old. How many years will I be able to continue to work at the same pace? I leave my home every day at 5 a.m. and do not return until 9 p.m. seven days a week. It is enough!”, stated Mr. Kalozinis.
As soon as Fellow Greeks heard the news, they wondered why the store was sold to a non- Greek owner.