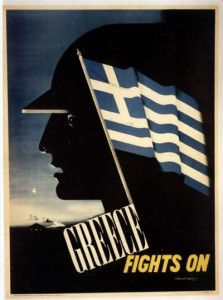 A former Disney Executive VP has joined writer N.J. Slabbert’s multimedia project about Greek heroism at war, THE SWORD OF ZEUS: THE HIDDEN STORY OF HOW GREECE SHAPED WORLD WAR II. Hellenes worldwide are being invited to send Mr. Slabbert, the project’s creator, their family’s WWII stories for possible use in a ZEUS film, book, educational web site and / or interactive DVD.

Since ZEUS was announced several months ago “a steady stream of international history” has poured into Mr. Slabbert’s office from enthusiastic supporters eager for their WWII stories or memorabilia to be included in the project. “I have been moved and honored by the material people have shared with me,” he says. “But it’s clear this is just the tip of the iceberg.”

The first book version of ZEUS is scheduled to be published next summer, Mr. Slabbert notes, “so people who would like to contribute memories, photos, family stories or other items are encouraged to do so soon. E-mail is quickest, although we have also been receiving much posted material in hard copy form.” Details can be found at www.theswordofzeus.info/.

THE SWORD OF ZEUS Project will include at least two books and a film, Mr. Slabbert has explained. The first book will be a prose narrative of WWII that will shed fresh light Greece’s part in the war. The second will be a graphic novel “using illustrations to tell the tale of Greece’s role in a way that will appeal to a wide band of age groups.” The film will be shot in Greece and other European locations.

“We want to use as much independently submitted historical material as we can in the print and screen versions of ZEUS,” Mr. Slabbert says, “but our plan is that what we can’t get into book or film form will eventually be placed online as an international educational resource about Greece’s remarkable part in WWII, and/or used in an interactive DVD for schools. I believe the Greek role in WWII has yet to be fully appreciated by both Greeks and non-Greeks. My hope is that online, on the screen and in print, ZEUS will contribute to that greater appreciation.”