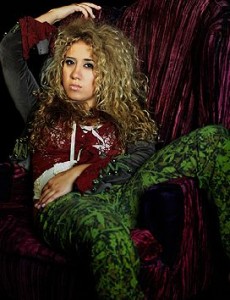 On December 19th, Electra Barakos rocked once more West Hollywood’s packed Whisky a Go Go. This was Electra’s first CD release show – performance for her new album, Problem Child . Electra is not a stranger to the Sunset “Rock” Strip since she has performed at different venues including the world famous Viper Room.

The Greek American Artist’s voice ranges from pop rock to smoother and more classical sounds.  Electra tells us about her life in music, and the major influence her father, Yanni Barakos-a renowned bass player in Greece-had on her career.

Where did you grow up?
I was born here but grew up in Athens, Greece.. And I graduated from a Greek Music High-school, and then decided to move back to LA to continue my music studies

Do you think that growing up where you did shaped your music in a certain way.
I have been involved with music my whole life.. My father who has been my biggest inspiration is a Bass player and has played with all the greatest Artists in Greece, therefore I was always either tagging along in tour busses or getting up on stage and singing a song or two with Keti Garbi or Adwnis Remos. I started playing piano, became a member of the national television station Ert -1 choir, and then attended a music high school which resembled “Fame”. My music is a representation of who I am in whole, and it is greatly influenced by all my experiences throughout my life in both countries

What is the inspiration of your best music?

My experiences in Life, whether it has to do with relationships, friendships, dreams, or even stress

Do you write your own songs? 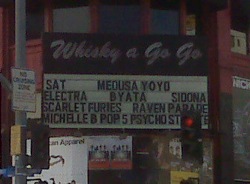 I co-write all my songs with Lyricist Mickey Kravitz, and my guitar player, Hyland Church. Mickey and Hyland have been writing for several years together and the chemistry between the three of us produces some great songs and like they say we just click!

When was your band formed and what is your role in the band?

I have been performing for a few years now in Hollywood. The line up I have now with, guitar- Hyland Church, Bass-Yanni Barakos, Keys-Sean Massey, Drums-Nate Gamb, Back up vocals-Bria Hill, Tara Romine, has been together for a year and I couldn’t ask for a better band! I am grateful and blessed to have such pro players in my team!

How is it to have your dad a part of your band? Does this create conflict?

It is amazing.. Aside from being my Dad, I could not ask for a better bass player! He is extremely talented and I am honored to have him part of my band. We don’t really have any conflicts, he is just like any other member of the band.. He is more like my buddy who happens to be my dad. I value his opinion and when I am live and look at the band, I glance at my dad and if he smiles, then I know that this is going well, and I get a smile within as well..

What languages do you sing in, and which do you prefer?

I got my bachelors in opera so when it comes to classical music I can sing in Italian, German, French, Spanish, Greek, and English. My rock pop material is English, but I do also occasionally perform in Greek music Gigs. Every Language is beautiful, as long as the music inspires me

What particular style of music do you like to perform?

I love opera and Greek/pop but where I am in my life right now Rock/pop gives me a chance to explore my crazy side and have fun!

To stay posted on Electra’s upcoming performances and to purchase her new c.d. visit www.electrabarakos.com