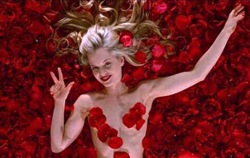 The American Beauty, Mena Alexandra Suvari is from Greek decent.  Her mother, Candice is Greek.

The Greek American Beauty currently has a new romantic comedy in development, “You May Not Kiss the Bride”. The film is rumored to be released early in 2010.  The film revolves around the story of an Eastern European mobster who tries to set up his daughter with an American pet photographer, played by Dave Annable to gain US citizenship. Mena plays to the role of Tonya, and Rob Schneider has also joined the cast as Ernesto, along with actress, Katharine McPhee.