Visiting the Ancient city of Petra in Jordan

Petra was a place that the local Beduins knew for years and tried to hide for the rest of the world. They knew it was a place that everybody would like to go and wonder around the narrow streets which are shaped in between huge stones. This is the reason the site is called Petra which in Greek means stone. The Beduins were the last inhabitants of the city and even today there are some who live in the caves of the archaelogical site. The Nabateans were the ones that started the city, but the Greek references when somebody is wondering around the narrow streets are endless. The city was abandoned the 6th century ad. Later it was revived by the Romans and then the Byzantines. Greek missions were visiting the city in its early years and Greek people mostly lived there during the early Byzantium years. If somebody wonders around Petra will see many greek columns and Greek names on tombs.

Today Petra is one of the largest attractions of the Jordanian Kingdom and attracts thousands of visitors every day.

The archaelogical site lays on the slope of Mount Hor in a basin among the mountains which form the eastern flank of Arabah (Wadi Araba), the large valley running from the Dead Sea to the Gulf of Aqaba. It is renowned for its rock-cut architecture. Petra is also one of the New Seven Wonders of the World. The Nabataeans constructed it as their capital city around 100 BCE. 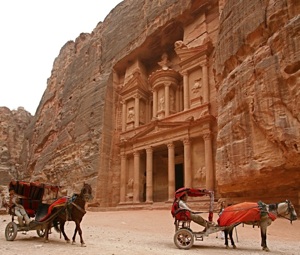 The site remained unknown to the Western world until 1812, when it was introduced to the West by Swiss explorer Johann Ludwig Burckhardt. It was famously described as “a rose-red city half as old as time” in a Newdigate prize-winning sonnet by John William Burgon. UNESCO has described it as “one of the most precious cultural properties of man’s cultural heritage.” In 1985, Petra was designated a World Heritage Site.

Where to Stay:
The Movenpick Resort is a Swiss hotel right next to the ancient city’s entrance. The hotel has raised the bar for luxury and comfort in the desert.

About ten minutes away there is another Movenpick the “Nabatean Castle” which offers great view to Petra.