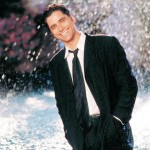 Actor John Stamos was the target of an extortion plot allegedly hatched by a pair of Michigan residents who threatened to release photographs that would harm his reputation unless they were paid nearly $700,000. According to the below FBI affidavit, the photos were taken at a party in Florida, where Stamos was vacationing. The extortion victim is only identified in the U.S. District Court document as “Mr. X, an actor.” Agents last week arrested Allison Coss, 23, and Scott Sippola, 30, in connection with the extortion plot. According to the affidavit sworn by FBI Agent Leslie Hahn, “Mr. X” attended a party with Coss and her friend in 2004, and “photographs of him were taken” during the bash. Since the party, the actor has maintained e-mail contact with Coss via her Hotmail account. Last month, Stamos–who starred in TV’s “Full House” and “ER” and currently appears in “Bye Bye Birdie” on Broadway–received several e-mails from a man identifying himself as “Brian L,” and who claimed to have “discovered the pictures taken during the 2004 party in Florida, and that such pictures would cause harm to Mr. X’s reputation if released to the media.” The man demanded a $680,000 payoff.

After Stamos’s lawyer contacted the FBI on November 28, agents began surveilling Coss and another suspect, who was later identified as Sippola. The alleged extortionists were arrested last Wednesday shortly after an undercover agent, “posing as a representative of Mr. X,” arranged with “Brian L” a money drop at a Princeton, Michigan airport. Coss and Sippola, pictured above, were released on bond last Wednesday and ordered to have no contact with “the alleged victim.”