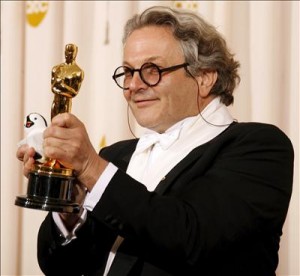 Greek-Australian filmmaker, George Miller was born of Greek immigrant parents.  His father, Dimitri Miliotis, from the Greek island of Kythira, adopted the name Miller when he emigrated to Australia.  His mother, Angela Balson, originated from Anatolia. George’s birthplace is Brisbane, Queensland in Australia. He was raised in Australia, and completed high school in Sydney. Miller went off to study medicine along with his twin brother, John, at the University of New South Wales.  In their final year at medical school; the brothers experimented with making a short one minute film that won recognition and first prize in a student competition.  This is where Miller’s spark ignited in the film-making world.  While George completed his residency at St. Vincent’s hospital in  Sydney; he spent his free time exploring his new found passion and talent for film.

Miller is a reputable director, screenwriter, producer and medical doctor that has been a prominent figure active in the industry for the past 40 years.

Miller, along with long-term friend and co-founder of Kennedy-Miller Mitchell Films, Byron Kennedy started the Mad Max film series.  These action films are futuristic stories about societal breakdown involving murder and vengeance. The first film was Mad Max, released in 1979 with Mel Gibson. There are two sequals that followed, and and now a fourth is on the way, Fury Road starring Charlize Theron.