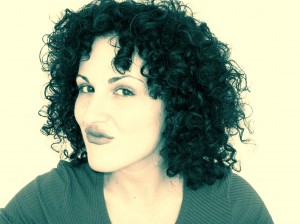 Greek-American, Angela Kariotis is not only a writer and performer, but also an educator.  Her work touches upon interesting topics revolving around science, philosophy, and history.  She thinks of herself as “Greek not White” and is active in hip hop culture.  Angela uses hip hop style to colorfully explore serious topics like ethnicity, gender and public policy; using movement, lyrics and different characters.  Her new one woman show just opened up in November, Streeetch Marks.  Be sure to look for Angela as she plans go on tour with this new production. Read on to learn more as Angela shares with us about her work and current show.

Tell us how you got started in your career and what is the inspiration behind your work?

I used to be on the forensics team when I was in grammar school. I went to Catholic school; it was either that or be a cheerleader. Forensics was how I first performed. I did the same thing in high school and got a scholarship for forensics in college. It’s a brainy extracurricular activity. We perform established plays, poetry, short stories, stuff like that. In college I got the idea to write my own performance pieces. I was reading all kinds of works. Instead of intimidating me, all these pieces I was reading inspired me. I had a few stories of my own brewing inside me. Reading other people’s stories gave me the license and courage to write my own. I wrote my first drama piece in college and made up a pseudonym! In graduate school I used every class to develop my original shows. I met Paul Bonin Rodriguez an award winning performance artist. He was my classmate! And he later became the director of my first one-woman show “Reminiscence of the Ghetto & Other Things That Raized Me.” I toured all over the country with that show. One thing leads to another.

I don’t consider my work autobiographical mostly because I’m not the least bit interested in talking about myself. That seems to self-indulgent, and I’m far too shy. However, it’s a slippery slope. My work is definitely and definitively inspired by my real life experiences. But it’s not JUST about ME. I hope it can be about everybody. That people will watch me and see a bit of themselves, listen to me and hear their own story too.

What part of Greece are you from?

How connected are you to your Greek roots?

I’ve been back to visit several times as an adult in recent years. I still have family there.

Has your Greek heritage had an influence on your work and If yes, how?

I am first generation Greek American. This fact has imprinted itself in my work, my language, and my psyche. In my first play, “Reminiscence of “The Ghetto & Other Things That Raized Me,” I dedicate an entire section illustrating the difference between being white and being Greek. In my second play “Say Logos Say Word” I write about bridging the gap between ancient and modern Greece. I brought to life the ancient writers and philosophers while negotiating a working class immigrant life here in America never having visited Greece. I ask “what does it mean to be Greek?” I concluded, to be Greek is not inherited, it is earned. My newest show “Streeetch Marks” also has a Greek influence because it brings in a generational theme. “Streeetch” Marks is about having a baby, so YaYa (my Mama) is a character with a lot of character!

You have a one woman show out now, Streeetch Marks that you wrote and also perform in. What is it about, and how did you develop the idea for the show?

Being married is one thing, not so life altering really, but having a baby is something else. It is a seismic shift in values. Practically speaking though I had to find a way to balance my art life and my home life. I had to combine both. So I wrote what I lived. I wrote about having a baby, deciding to become a parent, childhood, the psychology of babies, etc. I merged my worlds. Content informs form. 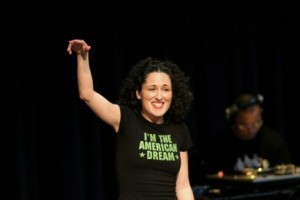 What is your most prided work thus far?

Probably Streeetch Marks. I say that because I am still in awe at how everything just comes together. Everything does happen for a reason. If I didn’t have a family I honestly wouldn’t know what I’d want to write about next. This newest play was also the hardest thing I’ve ever done. The demands of a baby, home, life etc. leave little time for creative dexterity. But somehow, it comes together. It’s also the most important piece I’ve ever written. I bring to light ideas rarely spoken about, like does a human soul exist before conception? I conjure Plato to help me answer that one. In this play I am the bravest I’ve ever been. The words demand that much. The story is key. I have to work that hard to live up to it. It the best writing I’ve ever done and also in terms of physical performance it is the most demanding, lots of movement and choreography. Most importantly though I think it has a wide variety of audience and Streeetch Marks is related to all kinds of people.

What is it like to be a white female performer in rap/hip-hop culture?

I’m involved in the hip hop theatre world. Theatre is open to everyone at all times. It’s an eclectic group from the get-go. People are initially surprised at seeing me walk onto the stage. I’m not a rapper or into the music scene other than that I frequent concerts or pick up Jay-Z’s latest album. The music and the culture are sometimes exclusive. Hip hop culture in its philosophy is an anthem for the other. Being a kid from an immigrant family growing up in a diverse neighborhood, there was nothing but hip hop. You’ll find many first generation kids from various cultures entrenched in hip hop. The triumph is that in terms of theater I get to tell very true stories in a unique voice. A challenge is that I must be accountable for my credibility and honor the aesthetic people from other cultures conceived.

What are your plans and goals for the future?

Streeetch Marks had it’s world premiere at The University of Texas at Austin in November 2009. My hope is to visit a few other cities with the show, and I am hoping for a limited engagement here in New York City. This way I can stay closer to home.

What title would you give yourself? Performer? Musician? Dancer or some other title?

I call myself a “writer – performer- educator.” I also teach creative writing and performance to people of all ages. Besides my latest play, my greatest pride is my relentless effort to work with and from within the community. I strive to be accessible as an artist. Helping people write and tell their own stories.