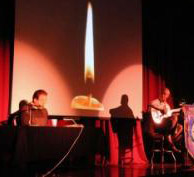 The Association of Magnesia Prefecture held an event in honour of “the Saint” of modern Greek Letters at Stathakeio Cultural Centre. The event was carried out in cooperation with the Hellenic Federation of Greater New York and was attended by prominent personalities and university professors, such as Queens College Professor, Mr. Nikos Alexiou, who stated that this event was an opportunity to reconsider the future of the American Diaspora and the preservation of the Greek Language which is in peril.
The event was also saluted by Mr. Evangelos Kyriakopoulos, Consul of Greece in New York and Mr. George Vlikidis, Consulate Education Coordinator of the Consulate General of Greece in New York, who congratulated the “Argonauts” on the event and for their interest in the preservation of the Greek Civilisation as well as the promotion of their homeland Magnesia. The event was also saluted by Vice President of the Hellenic Federation, Mr. Christos Vournas.
The President of the Association of Magnesia Prefecture, Demetra Savvelides, during her speech at the event focused on the exceptional interest of the “Argonauts” in the promotion of their homeland.
The Vice President of the Association and presenter of the event, Mr. Apostolos Zoupaniotis, made reference to the forthcoming events of the Association. On January 23rd the 4th Memorial Event for the Jewish Holocaust and on the 27th of February an annual ball will be held honouring the Prefect of Magnesia, Mr. Apostolos Papatolias. Along with the Prefect, a delegation of the Prefecture will also be present in the states in order to promote the Prefecture of Magnesia in an exhibition for Tourism, which will be organised by the “Times of New York”.
The presence of the delegation will be an opportunity to hold various events and make contacts in order to promote the Mediterranean Games of 2013 which will take place in Larissa and Volos, as well as all opportunities for development for the Prefecture of Magnesia. Lastly, in the beginning of the year a competition will be held on essays regarding Rigas Velenstinlis, in Greek Schools of the Diaspora, whereby the best will be awarded.
(source: greek insight)